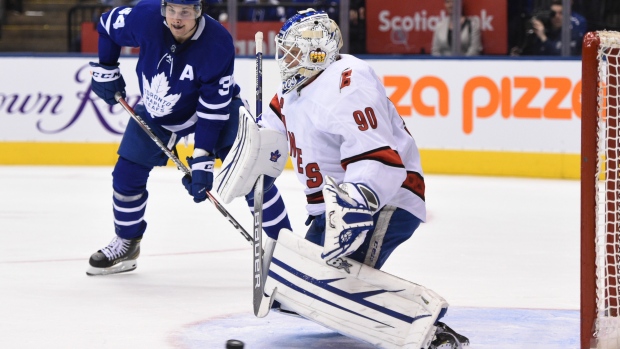 Despite discussions on Monday, the NHL general managers have decided not to change the emergency backup goaltender protocol in place moving forward.

Discussion of the rule came on the heels of 42-year-old David Ayres’ feel-good victory over the Toronto Maple Leafs on Feb. 22. Ayres entered that game in the second period and recorded eight saves on 10 shots.

GMs after discussing it today decided to stay status quo on EBUG. No changes to the emergency goalie protocol.

TSN Senior Hockey Reporter Frank Seravalli wrote Monday that some managers entered the meetings in Boca Raton, Fla. believing the system is working as intended and no changes are necessary. Only Ayres and Chicago’s Scott Foster (in 2018) have been pressed into action over the last four seasons – with nearly 5,000 games played during that span.

NHL deputy commissioner Bill Daly told NHL.com last week that the league had considered adding a non-roster goalie to a team’s traveling party, but noted that would have complications, as well.

“I think it's a fair question,” NHL deputy commissioner Bill Daly told NHL.com last week. “It's something we've given some consideration to over the years. As recently as last year, we discussed [it] with the general managers. It happens very, very rarely, but when it happens, it obviously raises everybody's attention to the issue and whether there are fixes that need to be made to that particular issue.”

The rule, as written, will continue to allow a team to dress “any available goalkeeper who is eligible.” The rule has generally restricted teams to using amateurs; team employees (former professional goalies turned goalie coaches) are not eligible to dress.