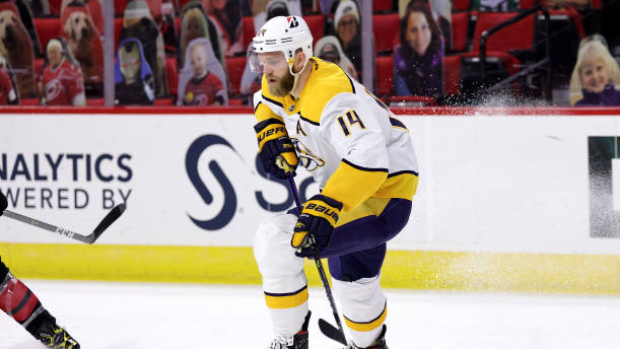 Listed at No. 1 on the TSN Trade Bait Board, Nashville Predators defenceman Mattias Ekholm is doing his best to block out the noise ahead of the April 12 deadline.

“I don’t try to focus in on it too much,” Ekholm told The Athletic on Monday. “I try to focus on my game. I have two kids at home. I (don’t) have too much time to worry about it.

“With that said, I understand that part of it. Obviously, I read some of it, trying not to read a whole lot of it, because, I mean, nobody knows anything right now. I know that in my time in Nashville, I’ve been very fortunate to maybe not to be in those conversations, as far as I know. But now, when I guess our team is doing bad, we understand nobody’s happy, and neither am I with the way we have played so far. So, with that comes decisions for management, and that’s just a part of it. There’s not much I can worry about (when it comes to) that.”

The 30-year-old, who is signed through next season at a cap hit of $3.75 million, told Adam Vingan of The Athletic that he has not asked for a trade and added his preference would be not to move during a pandemic. He did, however, admit that there is some level of confidence to be gained in being pursued.

“Like, if I sucked on the ice, then it would probably be harder to see (that) they just want to get rid of me,” Ekholm said. “Here, I don’t think that’s the case. I think I still can bring something to the team, and I think I’m a pretty good player. I can bring value back to the team, so I understand that whole part of it.”

A fourth-round pick of the Predators in 2009, Ekholm has spent his entire career to date in Nashville. He has four goals and nine points in 19 games this season while averaging 21:57 of ice time.

The Predators enter play on Wednesday sitting sixth in the Central Division at 11-14-1, eight points back of the fourth-place Chicago Blackhawks.