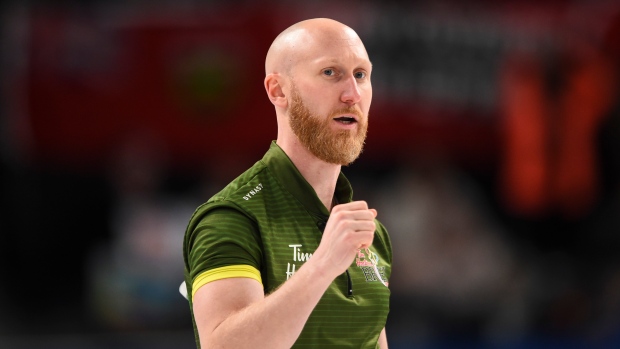 Team anointment at the national championships is a distinct possibility for at least one member curling association as it considers options for an uncertain season due to the COVID-19 pandemic.

The Northern Ontario Curling Association said Thursday that a final decision on its competitions has not been made, but the fate of its playdown season was "bleak."

If it remains unsafe to host bonspiels in its region, the NOCA said, the "results of the most previously completed competition" will be used to determine representation at national events like the Scotties Tournament of Hearts and Tim Hortons Brier.

In such a scenario, that would mean reigning champions Team Krista McCarville and Team Brad Jacobs would get the spots.

"Because we haven't had a competition since the last one, they still are our Northern Ontario champions," NOCA executive director Bobby Ray said from North Bay, Ont. "If there's an event that calls for those people to come forward and represent our territory, that's the way we've thought about it."

Elite curling competitions have started to resume in recent weeks on a more regional level due to travel restrictions.

Several top events, including four Grand Slam stops, have been cancelled and decisions on top domestic events set for early 2021 have not been made.

Original plans to hold the Scotties in Thunder Bay, Ont., in February and the Brier in Kelowna, B.C., in March have been all but officially dashed due to the pandemic. A hub city concept is being considered but nothing has been finalized.

A Curling Canada spokesman said the federation is working on a number of different options and hopes to announce something soon.

Gerry Peckham, Curling Canada's high-performance director, said playdowns in provinces and territories may not have a traditional setup this season due to the pandemic.

"It might be doable in one province and not in another," he said in a recent interview from Ottawa. "So they'll have to come up with some alternative mechanism to, if so inclined, to declare a team.

"But there are lots of forums now occurring at the provincial level behind closed doors, as provincial associations in consultation with health authorities try to determine where the guardrails would be on a province attempting to do a provincial championship in some way."

Fields at the Scotties and Brier are primarily filled with winners from provincial and territorial playdowns held beforehand. Some provinces have zone and regional qualifiers before their championships too.

Ashley Howard, the executive director of Saskatchewan's curling association, said the possibility of declaring entries is on CurlSask's radar, but she's hopeful the provincial championships set for Estevan, Sask., will proceed as scheduled.

"If at all possible we want to run our competition as planned and in our facility as planned, which would be a 12-team triple knockout," she said from Regina. "I certainly hope that we don't have to come to any other drastic measures. But things are changing so quickly.

"I don't know what things are going to look like this afternoon, let alone at the end of January."

With travel restrictions changing regularly and COVID-19 cases fluctuating throughout the country, there is no firm gameplan for these next few months.

"I'm happy with our (method)," Ray said. "It's not going to make everyone satisfied. But I can sleep at night with the rationale that we've walked through, that we have defending champions at the moment."

Ray noted that the majority of health units in his region have recommended that curling be limited to play among cohorts and that competitions be suspended for now.

With about half of the association's member clubs not planning to open until 2021, it would be difficult to stage a true championship for the entire region anyway, he said.

“If we were forced to make a decision today, sadly, all competitions would be cancelled for the season."

The Northern Ontario championships were originally set to be played in late January in Kenora, Ont. Dates, locations and formats for all events are "back on the table," the NOCA said, with no competitions to be held before January.

The Scotties and Brier both use 16-team fields with entries from each of the 14 provincial and territorial associations. Defending champions return as Team Canada and there is also a Team Wild Card.

This report by The Canadian Press was first published Oct. 15, 2020.