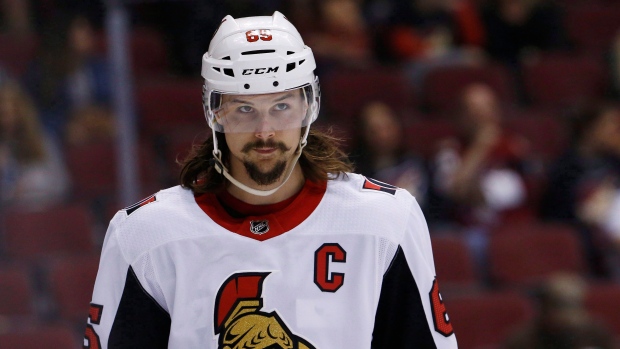 Track the latest news and rumours around the NHL with TSN.ca's Off-Season Watch.

With Hoffman out of Ottawa, who's next?

According to TSN Hockey Insider Darren Dreger, after shipping forward Mike Hoffman to the San Jose Sharks and then from the Sharks to the Florida Panthers on Tuesday morning, the Ottawa Senators will remain a hot spot for potential trades this week. Dreger says general manager Pierre Dorion continues to listen to offers on the team's star defenceman Erik Karlsson and left winger Zack Smith.

Ottawa will remain a hot spot this week. I believe Dorion is listening to interest on Karlsson and Zack Smith as a rebuild hits full stride.

Trade rumours have been swirling around Karlsson for months now. Following the season, Dorion said he and Karlsson had a 30-minute meeting during exit interviews, which was the longest session he had with any player. Dorion and owner Eugene Melnyk also said the club would offer Karlsson an extension on July 1 when the club was able to.

Meanwhile, Smith is two seasons removed from a career-year when he scored 25 goals. The 30-year-old signed a four-year, $13.5 million contract with the Sens ahead of last season. His deal includes a modified no-trade clause and carries a cap hit of $3.25 million.

Oilers in search of powerplay options

According to TSN's Ryan Rishaug, although the Edmonton Oilers are in need of someone to quarterback their powerplay, it doesn't look like Karlsson will be an option for the Oilers. However, Rishaug does believe that general manager Peter Chiarelli will be aggressive in trying to fill this need during the off-season.

My sense at this point is that as much as they may need a PP quarterback, Erik Karlsson is not going to be an option for the Oilers. I believe Chiarelli will be aggressive in trying to fill this need this off season.

TSN's Frank Seravalli notes that the Oilers also were one of the 10 teams on Karlsson's no-trade list, making any sort of deal a non-starter.

I believe the #Oilers are one of the 10 teams on Erik Karlsson's no-trade list. Hard to say with 100% certainty as these lists change and they can change at any instance. Aside from figuring out how EDM pulls it off, my impression was a few months back it was a non-starter. https://t.co/HeDX2cNNqr