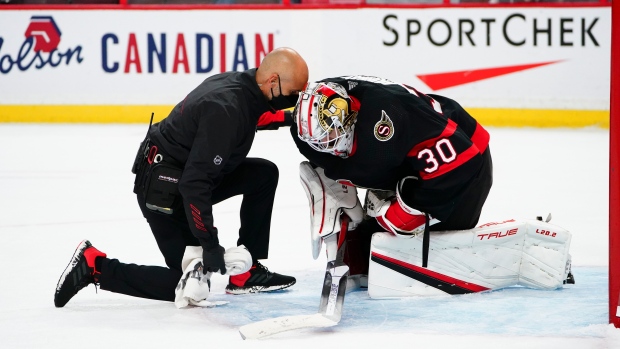 Ottawa Senators goalie Matt Murray is headed to the injured reserve with the head and neck injury he suffered against the New York Rangers Saturday afternoon, head coach DJ Smith told the media on Sunday.

Meanwhile, rookie centre Shane Pinto, who missed the game against New York after leaving Thursday's game against the San Jose Sharks with an upper-body injury, is expected to miss 1-2 weeks.

Shane Pinto likely out a week or two. "A little better than we thought," says Smith. #Sens

Murray was injured in the third period on New York's first goal of the afternoon, causing Anton Forsberg to come in in relief.

Murray made his season debut Thursday against the Sharks after missing the first several games of 2021-22 with an illness.

This is the 27-year-old's second season with the Sens after coming over in a deal with the Pittsburgh Penguins last October.