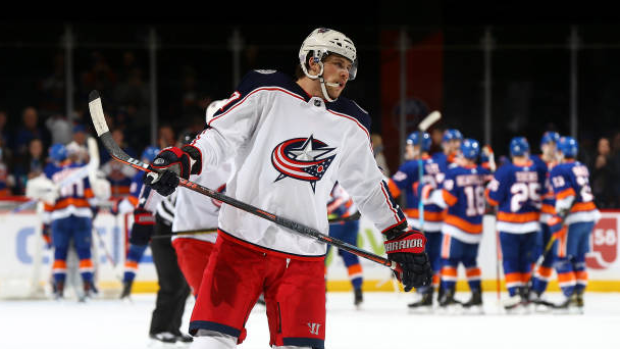 According to Aaron Portzline of The Athletic, "the feeling around the NHL" is the Columbus Blue Jackets are more likely to trade pending restricted free agent Josh Anderson - either at the deadline or in June - rather than reach an extension with the 25-year-old.

Portzline adds that both the Blue Jackets and Anderson's agent, Darren Ferris, claim there are no lingering issues from Anderson's last contract negotiation, but it's unlikely the forward will take a hometown discount this time after agreeing to a three-year, $5.5 million contract in 2017 after missing training camp.

Anderson has one goal and four points in 26 games this season and has been out of the lineup since Dec. 14 due to a shoulder injury. He scored a career-high 27 goals and posted 47 points in 82 games last season.

Portzline reports most executives he spoke to expect Anderson to be dealt by the Blue Jackets over the next month or in June in order to give the acquiring team a chance to sign him long-term, maximizing his value. If Anderson remains with the Blue Jackets, the two sides could head to arbitration this summer. Blue Jackets general manager Jarmo Kekalainen confirmed to The Athletic last week that contract talks had not yet been opened.

The Blue Jackets, who are on their bye week, occupy the top wild-card spot in the Eastern Conference and are on a six-game win streak. Portzline reports that Anderson could re-join the team's lineup when they return from their break on Saturday against the Sabres.

Anderson is listed at No. 19 on the TSN Trade Bait board.

The New York Rangers sit 11 points back of the final wild-card spot with 13 games left before the deadline, but Larry Brooks of The New York Post believes the team's mindset for the deadline has already been decided.

Brooks writes that "no one in the front office believes the future is this June" and expects the team to trade pending unrestricted free agents Chris Kreider and Jesper Fast if neither player is signed to an extension before the deadline. He adds that though the Rangers haven't opened talks with either player, it doesn't mean a deal can't get done before the Feb. 24 deadline.

As for the team's pending restricted free agents, Brooks writes the Rangers will have to weigh the potential returns over the value of keeping those players. Anthony DeAngelo, Ryan Strome and goaltender Alexandar Georgiev are all soon-to-be RFAs who could draw trade interest.

Kreider sits in the top spot on the TSN Trade Bait board, while Georgiev is listed at No. 5 with the Rangers currently carrying three netminders on their 23-man roster.

Pittsburgh Penguins general manager Jim Rutherford confirmed to The Athletic that he's looking for a top-six winger to help replace the injured Jake Guentzel, who is expected to be out until May.

“If the right one is out there, then yes, that’s what we’re looking at,” Rutherford said. “I’m not sure if I’d feel that way if Jake were healthy. But Jake’s not healthy. Ideally I’d like to give us more depth and more options in the top six. Can we do that, in terms of the right style of player and the right cost? That’s the ultimate question, but we are looking into it.”

The Penguins have been linked to Minnesota Wild forward Jason Zucker, while The Athletic's Josh Yohe notes Chris Kreider could be an option if the Penguins elect to enter the rental market.

“I’m open to all options,” Rutherford said. “I’m OK with a rental if that’s what’s there. Sometimes it’s actually better if a guy is an unrestricted free agent at summer. My main thing is finding a player who is the proper fit. I don’t care as much about how many years we’ll have him for. Sure, you consider that. But I want to win right now, this season. The goal is to win now.

"We have identified guys out there who we think can help us.”

The Penguins currently have $1.9 million in cap space, according to CapFriendly, but could free up $4.9 million by moving forward Alex Galchenyuk, who is listed at No. 12 on the Trade Bait board.

Rutherford made it clear that he's not worried about affecting the team's chemistry with any deals.

“I don’t worry about it that much at all,” he said. “My job is to locate players who will fit in with our style. This team is so glued together right now that a new player or two aren’t going to affect the character of this team, not one bit. The leadership and the character that we have are really, really strong. I think adding a player or two will only help this team.”

Pittsburgh sits second in the Metropolitan Division, six points back of the Washington Capitals.

Prior to Monday's loss to the Toronto Maple Leafs, Nashville Predators centre Matt Duchene felt that his team is not in need of deadline help for their playoff push.

The Predators, who fired head coach Peter Laviolette earlier this month, sit last in the Central Division and are currently six points back of the Vegas Golden Knights for the final wild-card spot with four games in hand.