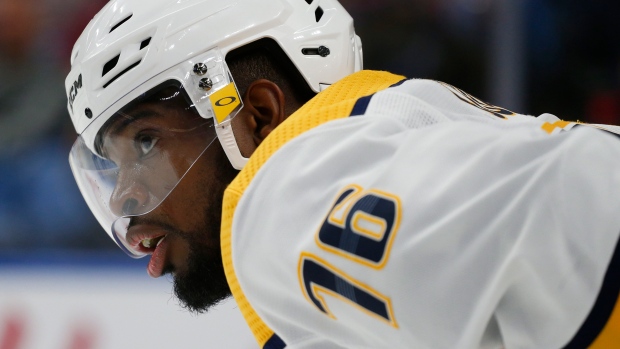 "I've been through the process before," Subban said in a conference call with the media Sunday. "There was a lot of talk after the season about what the Predators would do. Being in a (salary) cap world, every time you're up against the cap and when you draft well, you have to pay players. We kind of knew that there would be changes, especially after losing in the first round (of the NHL playoffs to the Dallas Stars). I didn't know what to expect."

But when Subban got the call while in California that he had been traded to the Devils for defenceman Steven Santini, prospect Jeremy Davies and second-round draft picks Saturday and in 2020, the 2013 Norris Trophy winner was elated.

"When I found out that I was traded to the New Jersey Devils, I was extremely excited," the 30-year-old Subban said. "I'm looking at it as a fresh start. My job is to come out and help build a championship team. Winning is the most important thing to me. It's the one thing I look at. I'm not playing for a contract. The most important thing is a championship and I haven't won one yet. I'm going to an organization that has won. You have to set yourself up to win a Stanley Cup."

The Devils won the Stanley Cup three times, in 1995, 2000 and 2003, but have qualified for the NHL playoffs just once in the last seven years, that being a first-round loss in 2018 to the Tampa Bay Lightning. The Devils failed to make the playoffs in 2019, but earned the first pick overall in the NHL Draft Saturday, with which the team selected American star Jack Hughes.

Although Subban is coming off the least productive season of his 10-year NHL career, scoring just nine goals and collecting 22 assists for 31 points in a career-low 63 games, he is confident that he can rebound with his new club.

"I always have something to prove," Subban said. "I don't look at anything as being my low year. I always have to look at the big picture. I have trust in my body. Before last year, I played 82 games. I'm confident that I have a lot of good hockey in me. We had a lot of great defencemen in Nashville. In New Jersey, it will be a different situation and a different opportunity. I can take on a leadership role."

Subban knows that getting traded to a new franchise will increase expectations.

"I have three years left in my contract (an 8-year, $72 million deal he signed with the Montreal Canadiens in 2015 and he's expected to earn $10 million a year with the Devils this season)," Subban said. "My expectations are to be in the top three or top five defencemen in the league. I know that if I'm at the top of my game, I could be the best in the league."

Subban said that he plans on moving to New Jersey with his girlfriend, former Olympic gold medal skier Lindsay Vonn.

"I have an amazing girlfriend," Subban said. "After games, it's great to have someone like that to come home to. She's really excited about coming to New Jersey. She's very supportive. She's no longer competing, but she's brought the competitive spirit over to my game. She talks about every player and is very interested. She has a lot of friends in the New Jersey area. She lived with me in Nashville and will be moving with me to New Jersey."

Although the Devils struggled in 2018-19, Subban is confident that the team will bounce back with the addition of him and top draft pick Hughes.

Subban seemed to be overjoyed by the trade to the Devils, even if the team is still in contract negotiations with former NHL Hart Trophy winner Taylor Hall.

"He's one of the go-to guys there and we have to get him signed," Subban said of Hall. "People understand that I'm not the only person there. All of us together want to make this team a champion. A lot of teams would dream to have the young talent that the Devils have. I'm there to compliment the young players. I'm confident that the best years are still ahead of me. I want to make a difference. I want to make an impact."