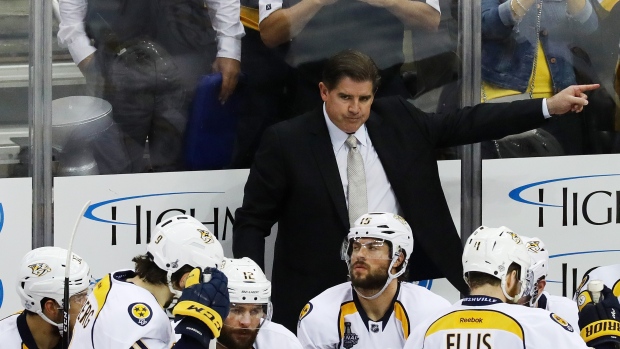 The development comes after TSN Hockey Insider Pierre LeBrun reported earlier this week that the team was down to four finalists, but the search is currently on pause until a later time.

"Well, I'd say there's a number of top candidates including the interim head coach, who's with the New Jersey Devils, Alaine Nasreddine, but the name that I keep hearing is a familiar one," Dreger said on Insider Trading. "And that is Peter Laviolette, formerly of the Nashville Predators, but Tom Fitzgerald, who is the interim general manager, who has been managing this search. He still hasn't had the interim tag removed from his title. So it's an ongoing process for the Devils."

Nasreddine told NHL.com earlier this week he hasn't "heard anything" on his future with the team. He replaced John Hynes behind the Devils' bench on Dec. 3 and guided the team to a 19-16-8 record after a 9-13-4 start under Hynes.

Laviolette was fired by the Predators on Jan. 6 and replaced Hynes after a 19-15-7 start to his sixth season with the team. The 55-year-old has a career record of 637-425-25-123 as a head coach with the Predators, Philadelphia Flyers, Carolina Hurricanes and New York Islanders. He guided the Hurricanes to a Stanley Cup in 2006 and reached the Stanley Cup Final with both the Flyers (2010) and Predators (2017).

New Jersey sat 14th in the Eastern Conference when play was stopped on March 12 and will not be included in the NHL's 24-team Return to Play plan.