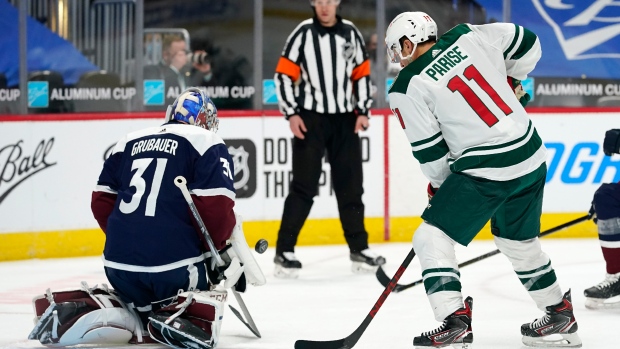 DENVER — Philipp Grubauer stopped 27 shots to lead the short-handed Colorado Avalanche to a 2-1 win over the Minnesota Wild on Tuesday night.

Logan O’Connor and Valeri Nichushkin scored, and Cale Makar had an assist for the Avalanche, who have earned five of a possible six points in the third of four straight games against the Wild.

Kirill Kaprizov scored and Cam Talbot had 29 saves for Minnesota.

Colorado leading scorer and first-line centre Nathan MacKinnon is out with a lower-body injury that will keep him sidelined week-to-week, the team said earlier Tuesday. MacKinnon was hurt Sunday against the Wild and it adds to an already long list of players who have been injured.

“I think everybody tries to step up and help the role,” Makar said. “Obviously he’s a very special player and not any single person can fill that void. I think everybody as a collective group steps up and plays the role that we need them to.”

The Wild are without defenceman Matt Dumba, who was placed on injured reserve on Sunday. They played the third period with just five defencemen when Jared Spurgeon didn’t return after the second intermission due to an upper-body injury, coach Dean Evason said.

“Losing Spurg is obviously not ideal,” Jordan Greenway said. “He played a lot of minutes, he has a huge impact on our team, and he leads our team. We need guys to step up and play bigger roles. That’s what we’re going to need.”

Colorado grabbed the lead late in the first period on O’Connor’s second goal of the season at 17:45. Nichushkin made it 2-0 in the second period when he buried a rebound at 7:09 for his second of the season.

“You’re not going to see too many pretty goals from our line, we’re just trying to muck it up a bit,” O’Connor said. “We’ll leave those pretty ones to (Mikko) Rantanen, Cale or whatnot. We want to play to our identity, get puck to the net, get traffic, create those in-tight scrums and just try and get greasy ones.”

The Wild got one back on the power play when Kaprizov scored off a pass from Zach Parise at 13:05 of the second period. It was his third of the season.

Carson Soucy missed an open net late in the third and Minnesota had several chances in the final minute after Talbot went off for an extra skater. Grubauer stopped a couple of shots and then the Avalanche were able to run out the clock in the Wild end.

“Off my stick it looked like it was going in,” Soucy said. “That’s the worst part. I’ll see flashbacks of that tonight for sure.”

Spurgeon’s status wasn’t clear after the game, but Minnesota is going to get forward Kevin Fiala back for Thursday night. Fiala served the last of his three-game suspension for his hit on Los Angeles’ Matt Roy last week.

“Absolutely looking forward to it. He’s very remorseful what happened,” Evason said. “Kevin is such a competitive kid, sitting out hopefully revved him back up to come back and play the hockey we know Kevin Fiala can play.”

With Colorado’s lineup ravaged by injury, Grubauer came up with some big saves and earned the praise of his teammates.

“He’s been incredible for us,” Makar said. “He’s the backbone of our team. Honestly, it just gives us a lot of confidence when you’re in front of him.”