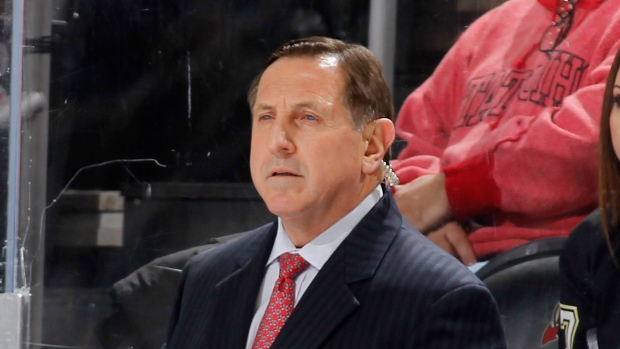 The Ottawa Senators have received permission from the Pittsburgh Penguins to interview Jacques Martin for their vacant head coach position, according to Bruce Garrioch of Postmedia.

The Senators have been without a permanent head coach since firing Guy Boucher on March 1, though Garrioch adds the team has already interviewed interim head coach Marc Crawford and Belleville Senators head coach Troy Mann for the job.

Garrioch reports that indications are the Senators will also meet with Providence Bruins bench boss Nate Leaman, who is currently coaching in the first round of the AHL playoffs.

Martin, 66, has 17 years of experience as an NHL head coach, including nine seasons with the Senators from 1995-2004. He guided the team to the playoffs in every season he was with the Senators, but failed to advance past the Eastern Conference Final.

Martin, who won the Jack Adams Award with Ottawa in 1999, coached the Florida Panthers and Montreal Canadiens following his time with the Senators, but has not held a head coaching role since being fired by the Canadiens 32 games into the 2011-12 season. He has spent the past three seasons as an assistant coach with the Penguins.

Martin has also been mentioned as a candidate in the Buffalo Sabres coaching search.

Garrioch reports the Senators would like to interview five to six candidates before moving on to second interviews and adds the team may be staying patient in case any playoff teams decide to part with their head coach.

The Senators finished last in the NHL this season with a 29-47-6 record, with Crawford posting a 7-10-1 record in his time behind the bench.