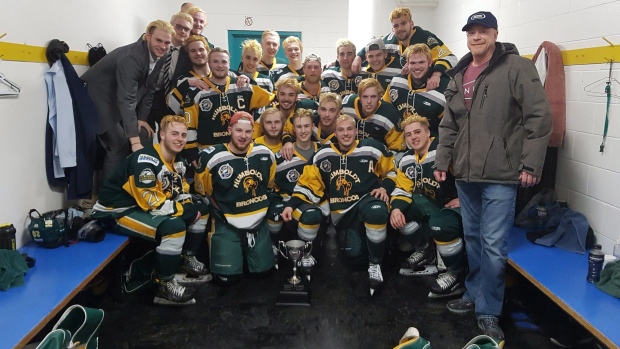 NIPAWIN, Sask. — RCMP say 14 people are dead and 14 people were injured Friday after a truck collided with a bus carrying a junior hockey team to a playoff game in northeastern Saskatchewan.

Police say there were 28 people including the driver on board the Humboldt Broncos bus when the crash occurred at around 5 p.m. on Highway 35 north of Tisdale.

"We can now confirm fourteen people have died as a result of this collision," RCMP said in a release early Saturday.

"The other fourteen people were sent to hospital with a variety of injuries; three of these people have injuries that are critical in nature."

No names were released and police would not say whether the dead include players or coaches. There was no mention of the truck driver.

The president of team said parents from across Western Canada were rushing to the scene as they struggle to cope with the tragedy.

"It's one of the hardest days of my life," said Kevin Garinger.

"There have been multiple fatalities — our whole community is in shock, we are grieving and we will continue to grieve throughout this ordeal as we try to work toward supporting each other."

Derek Grayson and Nick bonding and healing in hospital pic.twitter.com/DzesIoT27B

Garinger said the Saskatchewan Junior Hockey League team includes players from Edmonton, Slave Lake and Airdrie in Alberta and from Saskatchewan and Manitoba.

Michelle Straschnitzki, who lives in Airdrie, said her 18-year old son Ryan has been taken to hospital in Saskatoon.

"We talked to him, but he said he couldn't feel his lower extremities so I don't know what's going on," she said, noting she will go to Saskatchewan on Saturday.

"I am freaking out. I am so sad for all of the teammates and I am losing my mind."

The team was on its way to play in Game 5 of a semi-final against the Nipawin Hawks.

Darren Opp, president of the Hawks, said a semi T-boned the players' bus.

Opp said the coaching staff and players from the Hawks are waiting to help.

"They are sitting in the church just waiting to hear any good news," he said. "I've got 50 phone calls at least saying what do you want?

"There's uncles and moms and dads waiting to hear whether their sons and nephews are OK.

"It's terrible. It's absolutely terrible."

Pastor Jordan Gadsby at the Apostolic Church in Nipawin said more than a hundred people have gathered at the church — including parents and grandparents of the players who were on the bus.

Gadsby said they know there are multiple fatalities, but they haven't heard how many.

Garinger said the Broncos are a close-knit team from the small city of about 6,000 people 110 kilometres east of Saskatoon.

"This team has been an incredible rock in this community," he said. "These young athletes. They are incredible young men, every one of them."

Garinger, who has one of the players living in his home, said they still don't know his fate.

"We don't know who has passed and we don't expect to know right away," he said. "We know that the coroner and their office needs to do their work and let families know."

Garinger said all the team can do now is help the players and their families anyway they can.

"We just need to try to support each other as we deal with this incredible loss to our community, to our province, to our hockey world."

Kevin Henry, a coach who runs a hockey school in Prince Albert, said he knows players on the team.

"People are in such shock. All these young men and boys. We send our kids to play hockey. It is sort of every parent's worst nightmare," he said.

"This is I would think one of the darkest days in the history of Saskatchewan, especially because hockey is so ingrained in how we grow up here."

STARS air ambulance has confirmed that they sent three helicopters to the scene.

"Humboldt Broncos weighing heavy in our hearts and minds tonight," the team said on Twitter.

Four members of the Swift Current Broncos were killed in a bus crash in Saskatchewan in 1986.

Former NHL player Sheldon Kennedy, who was one of the players on the bus in 1986, also sent a message of support.

"Sending all my thoughts and prayers to those impacted with the @HumboltBroncos bus crash."

Saskatchewan Premier Scott Moe said what he has been told about the collision is difficult to comprehend.

"To the City of Humboldt, the entire Broncos organization, and the families impacted by this tragedy, please know you are in Saskatchewan's hearts," Moe said in a statement.

"From a grieving province, thank you to every one of the first responders and medical professionals for your courageous response under the most difficult circumstances imaginable.

"Tonight, we all must pray for these families."

— By Colette Derworiz and John Cotter in Edmonton