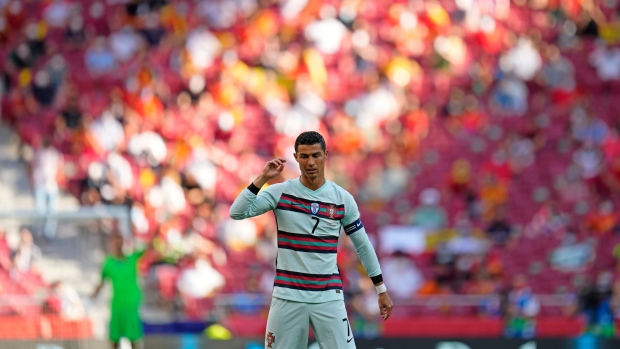 MADRID (AP) — Watched by almost 15,000 fans, Spain and Portugal drew 0-0 in Madrid in a warm-up match for the European Championship which attracted the biggest crowd Friday for any event in Spain since the start of the coronavirus pandemic.

In a festive atmosphere not seen in soccer matches in the country in more than a year, the 14,743 fans at the Wanda Metropolitano Stadium chanted and waved flags, and jeered nearly every time Portugal great Cristiano Ronaldo touched the ball.

There had been smaller crowds at other events and matches across Spain, including the Madrid Open tennis tournament in May. No more than 5,000 fans had been allowed at some Spanish league soccer matches at the end of the season in regions where the pandemic was more under control.

The last time fans were allowed at Atlético Madrid’s Wanda Metropolitano was in a Spanish league match in March 2020.

Spain has been one of the hardest-hit countries by the pandemic, and its vaccination campaign only recently has picked up pace.

“It was beautiful,” Spain’s Pablo Sarabia said. “Fans are a crucial part of soccer. It had been strange to play in empty stadiums. It’s amazing to have the crowds back with us.”

Spanish officials initially said up to 30% of the 68,000-capacity stadium — more than 20,000 — could be filled, but later the total number of fans was reduced to 15,000 based on guidance from health authorities.

Spain’s national team hadn’t played in front of its home fans since November 2019, when it defeated Romania 5-0 at the Wanda Metropolitano in qualifying for Euro 2020.

“It was about time they started allowing fans to return to the stadiums,” said Ramon Moya, a 28-year-old Barcelona fan who lives in Madrid. “This crisis has been going on for a long time and the people need to start going back to their normal lives.”

There were different time slots for the arrival of fans on Friday, and they had to wear masks at all times. Smoking, eating and drinking was not be permitted in the stands, and social distancing had to be respected inside the stadium.

A few hundred Portugal fans were loudly heard early on at the Wanda Metropolitano. There was a mix of jeers and cheers — all loud — when Ronaldo, the former Real Madrid star, first came on the field to warm up.

The 36-year-old forward remained six goals away from tying the all-time scoring record for a men’s national team. The record of 109 goals is held by former Iran striker Ali Daei, the only other male soccer player to surpass the 100-goal milestone. Ronaldo’s best chance of scoring on Friday was with a header that just missed in the 67th minute.

It was mostly a lackluster match, with neither team creating many scoring opportunities. There was more action in the second half but nobody could capitalize on their opportunities.

Portugal had a goal by José Fonte disallowed in the 22nd for a foul by the defender before he headed the ball into the net. Álvaro Morata missed chances for Spain in the second half, hitting the crossbar in a breakaway in stoppage time.

Defender Aymeric Laporte made his debut with Spain after having played for France’s youth squads.

“It wasn’t the result we wanted, but we did some things well,” Laporte said. “Portugal is a great team, it has great players. It was a good warm-up match that will help us a lot.”

Spain’s final warm-up match for Euro 2020 will be on Tuesday against Lithuania at the Butarque Stadium in Leganés, just outside Madrid. Defending European champion Portugal will host Israel on Wednesday to close out its preparations.

Portugal will play in a difficult Group F that also includes Germany, France and Hungary, which edged Cyprus 1-0.

Spain is in Group E along with Sweden, Poland and Slovakia.

Before the match, players from both teams posed for a photo wearing T-shirts promoting Portugal’s and Spain’s joint bid to host the 2030 World Cup. Top government officials from both countries were at the stadium, signing an agreement for the bid.

Italy put on a convincing display in its last warm-up match before Euro 2020 with a 4-0 win over the Czech Republic.

Ciro Immobile provided Italy’s opener in the 23rd when the Lazio forward controlled a loose ball and fired it in with his right foot. Nicolo Barella doubled the lead three minutes before halftime with a shot that took a deflection off a defender before finding the net.

Immobile set up Lorenzo Insigne to make it 3-0 in the 66th before Domenico Berardi added a fourth.

Roberto Mancini’s Italy faces Switzerland, Turkey and Wales in Group A at Euro 2020.

Giacomo Raspadori made his debut for Italy when the 21-year-old Sassuolo forward came on as a substitute.

The Czechs are in Group D with England, Croatia and Scotland.

Finland lost 1-0 to Estonia before it plays in Group B against Belgium, Denmark and Russia.

North Macedonia routed Kazakhstan 4-0 as it gets ready to face Austria, Netherlands and Ukraine in Group C.