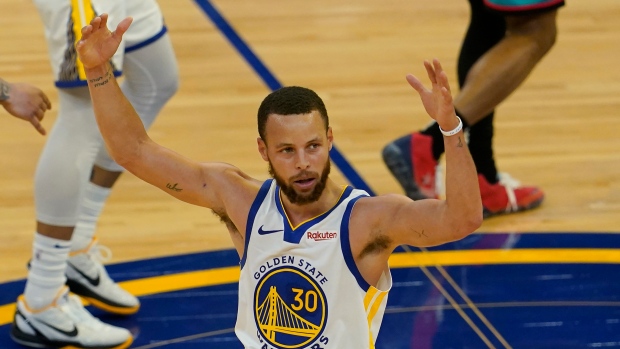 SAN FRANCISCO (AP) — Stephen Curry lifted his jersey to celebrate Baron Davis-style in an ode to that old “We Believe” Warriors playoff team of more than a decade ago. He flung a game-worn bracelet into the stands that sent fans chanting “M-V-P!” scrambling for the souvenir from another stellar performance by No. 30.

Curry became the oldest scoring champion since Michael Jordan at age 35 in 1998, finishing with 46 points as Golden State held off the Memphis Grizzlies 113-101 on Sunday in a regular-season finale that determined the play-in tournament’s eighth and ninth spots.

“Shoutout to Baron Davis,” Curry said — and BD might say the same for Steph.

Curry is still playing his best basketball in his 12th NBA season, and the two-time MVP and his Golden State supporting cast still have a chance at making a splash in the playoffs the way the underdog Davis-led group did in 2007.

The Warriors wrapped up the No. 8 seed and will play Wednesday, while Memphis finishes at No. 9 and will host the Spurs on Wednesday. Golden State’s opponent was dependent on Sunday night’s results for the Lakers and Portland.

At 33, Curry and Jordan are the only scoring champions age 33 or older. Curry also joins Jordan, Wilt Chamberlain and Kareem Abdul-Jabbar as the only players with multiple scoring titles, MVPs and championships.

“He’s like the Picasso of our time,” teammate Juan Toscano-Anderson said. “You can’t have a knock on him. He’s the best doing it right now.”

Curry locked up his first scoring title since 2015-16 with his second basket of the game late in the first quarter. He made 9 of 22 3s and also contributed nine assists and seven rebounds in Golden State’s sixth straight win. Curry averaged 32 points during his second 2,000-point season.

“I’ve been blessed to be back healthy and be able to just play night in, night out at a high level, and the work that goes into it, it pays off, and it’s something that I really, really rely on, especially at this point in my career," Curry said. “As the years go on, that is the difference-maker for me."

He had help again, too.

Jordan Poole hit a go-ahead baseline 3 with 4:28 remaining. Wiggins dunked off a miss by Curry from deep the next time down and scored 21.

Jonas Valanciunas had 29 points and 16 rebounds for the Grizzlies. Ja Morant added 16 points and nine assists.

Dillon Brooks started the fourth quarter on an 8-0 run all by himself to pull Memphis within 86-77 — and Curry immediately returned, hitting a 3 with 8:23 to go.

“He's never been better, I can say that,” coach Steve Kerr said.

“Draymond pretty much turned that water off using his IQ,” Toscano-Anderson said.

Brooks regretted a couple of his costly fouls.

“I should’ve not fouled. I feel like the outcome would’ve been different,” Brooks said. “I play as hard as I can and leave the chips where they fall.”

Both teams entered with identical 38-33 records and five-game win streaks. They split a back-to-back set March 19-20 in Memphis.

It marked quite a special day for outgoing Warriors President and COO Rick Welts, who is departing the position after 10 years with the franchise. He led the construction plans for second-year Chase Center and will stay on in an advisory role. Kerr spoke on the court before tip-off, both thanking the fans and honoring all that former Seattle SuperSonics ball boy Welts has done for the NBA and Warriors.

Curry missed his first four shots and initial three 3s before a layup with 3:45 remaining in the opening quarter. He then hit a jumper the next time down to become scoring champion — drawing roars and a standing ovation.

Warriors: G/F Kelly Oubre Jr. missed his 10th straight game with an injured left wrist. He was re-evaluated and showed progress in his recovery, but is not cleared to practice and won’t be re-examined for another week to 10 days. ... Golden State won 10 of the last 11 at home to finish with a 25-11 record at Chase Center. ... The Warriors signed G Gary Payton II, who previously had a pair of 10-day contracts with the team.

The Warriors hosted 18-year-old activist Tiana Day, who last summer led a Black Lives Matter protest on the Golden Gate Bridge that attracted some 50,000 people after just 18 hours of planning.

“I feel really powerful, I feel like I have a voice,” said Day, who has started her own non-profit and took a year off from starting college to focus on her efforts.

Golden State has regularly recognized an “Impact Warrior,” someone making a positive impact through their leadership in the community.

Grizzlies: Return home to face 10th-seeded San Antonio, with that winner advancing to take on the loser of the 7 vs. 8 play-in game for the No. 8 playoff seed.

Warriors: Hit the road to play the West’s No. 7 seed in the play-in tournament to determine the seventh seed for the playoffs.