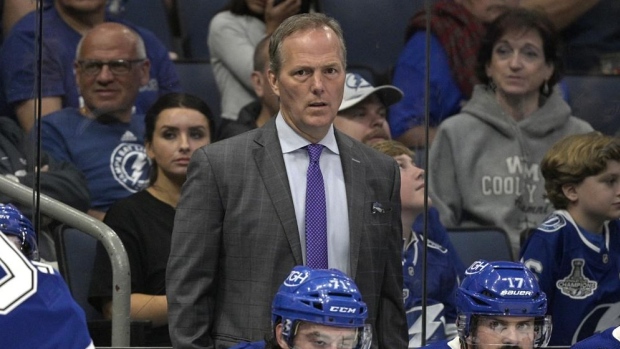 Jon Cooper did not hold back when discussing his feelings on missing the chance to make his Olympic debut behind the Team Canada bench in Beijing in February.

"To be honest, it was devastating," Cooper told TSN Hockey Insider Pierre Lebrun in The Athletic on the NHL's recent decision to withdraw from the Olympics due to the ongoing pandemic.

The two-time Stanley Cup Champion as head coach of the Tampa Bay Lightning pointed to the passion for hockey in Canada and how that drove his excitement to step behind the bench for the Olympics.

"I look at the sport of hockey, the country of Canada and the marriage the two have and the passion the country has for it - the thrill of being named to that position. It didn’t sit lightly with me," the native of Prince George, B.C. said.

“I was genuinely humbled and honoured to have that opportunity. And then to have it swept out from under you, it … it just leaves you empty.”

Cooper, who had been preparing for the moment since being named to the position in August, is mindful of the unique opportunity that has been taken away.

“You just don’t know when these opportunities are going to come around,” Cooper said.

“When you’re going through your career, and you put yourself in the position for this to happen, again, I don’t know any other way to put it than it’s a real empty feeling.”

Beijing 2022 represents the second straight Winter Games the NHL has not been a part of, as the league also elected not send players to 2018 Olympics in PyeongChang.

The last time NHL players participated in the Olympics was in 2014 in Sochi, Russia when Canada took home the gold medal.