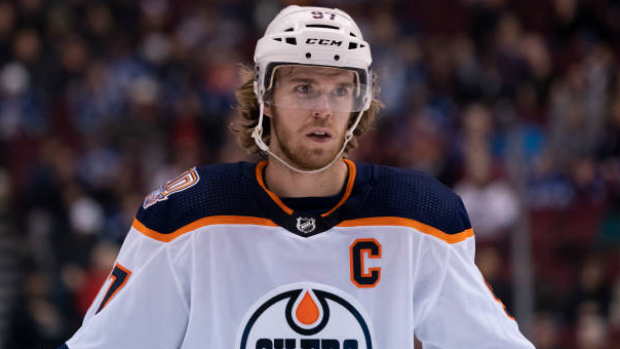 It’s bad enough that the Edmonton Oilers wasted all three seasons of Connor McDavid’s entry-level contract. Save for one playoff series win in the 2016-17 season, the Oilers have nothing to show for the luxury of three years with the world’s best hockey player on a middling $925,000 average annual value contract.

Year four is headed in the same direction. McDavid, now making $12.5 million per year and probably still underpaid relative to his talent, is staring up at the majority of the Western Conference. His head coach, Ken Hitchcock, is publicly theorizing that the coaching staff wants to win more than the players do. The Oilers are 13 points out of the third spot in the Pacific Division and four points back of the final wild-card spot, but getting there would require leapfrogging five different teams. That’s why their playoff odds are currently forecasted at 14 per cent and dropping.

It would be premature to eliminate the Oilers right now, but that seems like a trivial discussion, all things considered. The bar for success for this team – considering what they have at their disposal – can’t be just to qualify for the postseason as one of the league’s 16 best teams.

The Oilers should have higher aspirations. After all, the last time a generational player came into the league we saw rapid and stepwise improvement from his team. Remember the 2005-2009 Pittsburgh Penguins? They missed the playoffs, and then had a first-round exit, a Stanley Cup Finals loss and a Stanley Cup victory in the first four years of Sidney Crosby’s career.

Some might point to the fact that Crosby had help. He sure did!

Nothing was more material to the franchise's long-term outlook than being able to also draft Evgeni Malkin. But Sergei Gonchar, Petr Sykora, Ryan Malone, and the mid-season acquisition of Marian Hossa all played pivotal roles in year three when the team found itself in the Stanley Cup Final. Everything Pittsburgh did, from the moment they fell into Crosby, was to ensure that the roster around him was as capable and competent as possible.

That’s precisely the opposite of what has happened in Edmonton. Keep in mind, this team had three years with no material cap implication whatsoever from McDavid. The team has also been flush with high first-round picks this decade (including but not limited to: Taylor Hall, Ryan Nugent-Hopkins, Oscar Klefbom, Nail Yakupov, Darnell Nurse, Leon Draisaitl, Jesse Puljujarvi, Kailer Yamamoto, and, most recently, Evan Bouchard). It should have been the perfect recipe to find complementary players to build around McDavid for years, up until the point where the salary cap gets increasingly more difficult to manage.

Instead, the Oilers have been a nightmare of epic proportions when McDavid isn’t on the ice. If you go through Edmonton’s four-year game log and partial out their results with and without McDavid on the ice, the numbers are jarring.

Let’s start with shot advantages and territorial play. McDavid is a masterful attacker and the Oilers either sustain consistent offensive zone pressure with him on, or are able to flip zones because of his ability to jump-start the rush. When he’s gone, it’s as if the team goes into a shell and hopes to not give up a goal.

The below graph shows Edmonton by cumulative shot advantages in the McDavid era, as well as a rolling game average (percentage of total shots in favour of Edmonton): 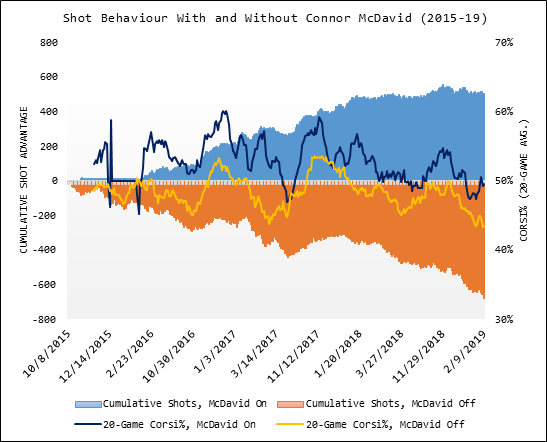 It’s the type of data that makes you check, and check again, and then check a third time just to make sure you didn’t screw something up. But yes, it is absolutely that bad. With McDavid on the ice, the Oilers have been 508 shots (52 per cent Corsi%) better than their opponent. That’s absolutely playoff-calibre hockey.

With McDavid off the ice, it’s a different story. The Oilers are 671 shots worse than their opponents, with around 47 per cent of the shot share. That’s really underwhelming, especially considering how many opportunities – through the draft and free agency – the team has had at trying to juice performance further down the lineup.

It’s completely natural for a team’s second through fourth lines to underwhelm relative to a team’s first line. Star players still drive performance and we would be asking entirely different questions if depth lines were substantially more productive than top lines. But it doesn’t need to be this bad. Consider just this season: the Toronto Maple Leafs get over 50 per cent of the shots with Auston Matthews off the ice. The same is true with the Winnipeg Jets and Mark Scheifele, the Calgary Flames with Johnny Gaudreau and the Tampa Bay Lightning with Steven Stamkos. You get my point.

This is just shot share, though. How is it translating to goals? Any differently? It’s actually much worse. (We will use a slightly longer smoothing scale for the goal percentages due to the higher volatility). 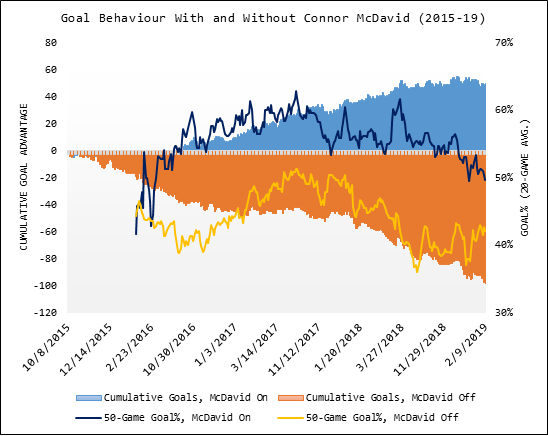 The Oilers are 49 goals better than their opponent (55 per cent Goal%) with McDavid on the ice over the last four years. Only 21 forwards around the league have a better Goal% in that span, and almost all of those players were employed by Stanley Cup- calibre teams that routinely overran their competition. With McDavid off the ice? They are 98 goals worse than their opponent (43 per cent Goal%). That’s the difference between a Stanley Cup contender and a team that is chasing the first-overall pick in the draft lottery.

Just as a point of reference, the worst team by Goal% over the last four years are the Buffalo Sabres, who actively tanked a couple of those seasons and just recently returned to a brand of semi-competitive hockey. Their Goal% over that span is 44 per cent.

There is going to be a lot of soul-searching for this organization post-Peter Chiarelli. I think the organization wants to point to the general manager and head coach – both of whom have been removed from their duties – as the reason for this futility, but they can’t possibly shoulder all of the blame.

It would certainly appear that there is something more afoul within the organization, and now the club no longer has the luxury of skirting their mistakes due to a lack of salary cap pressure. The Oilers are right up against the cap ceiling and don’t have any obvious relief, save for a possible trade to get off of Milan Lucic’s contract – and that transaction will probably end up costing Edmonton more than they would like.

The next general manager, whoever he may be, has his work cut out for him.