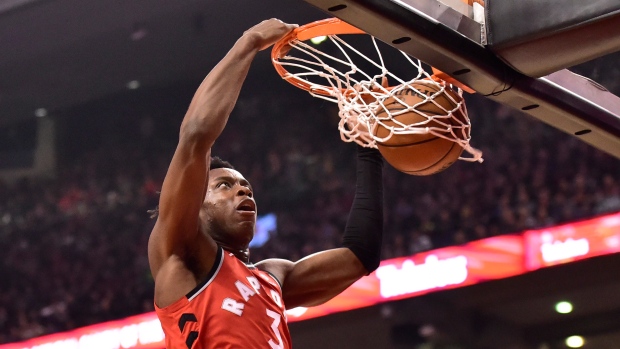 TORONTO — OG Anunoby returned to the Toronto Raptors lineup Sunday for the first time since having an emergency appendectomy on the eve of the NBA playoffs.

But coach Nick Nurse suggested he may not play much to start with in the NBA Finals.

"It's been a long time since he's played," Nurse said Sunday night just prior to Game 2 against the Golden State Warriors. "He has been pretty active here in the last four or five days though as far getting up and down the floor and things. He has lost quite a bit of weight as well. So there's that and there's the timing.

"I don't probably see much of a chance to play him. But you never know. You never know what could happen and he is a big, strong athletic guy. And you never know a situation might arise. But I would imagine it's down the road here a little bit in this series."

The 21-year-old forward missed the Raptors' first 17 games of the post-season since his April 11 surgery two days before Toronto opened the playoffs against Orlando.

But he was upgraded to probable in advance of Game 2.

Anunoby, who had the surgery at Toronto's Mount Sinai Hospital, missed 15 games in the regular season, sitting out eight games early on for personal reasons. He also missed three with a wrist sprain, and four games with concussion-like symptoms.

The six-foot-eight Anunoby averaged 7.0 points, 2.9 rebounds and 20.2 minutes per outing in 67 games in his sophomore season. He scored in double figures 15 times, with two 20-point games.

The Warriors remain without star forward Kevin Durant, out since May 8 with a calf injury.