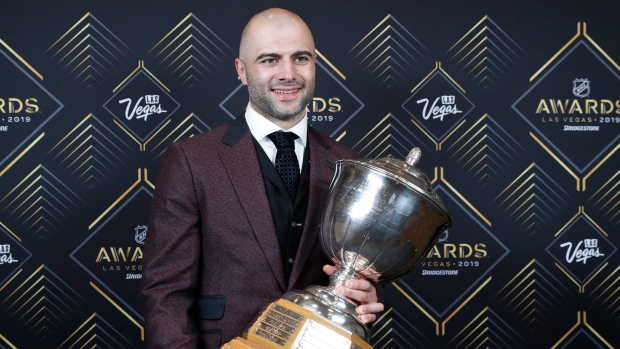 Calgary's Mark Giordano has won the Norris Trophy as the NHL's top defenceman.

The 35-year-old Giordano won the Norris for the first time in a 13-year NHL career spent entirely with the Flames. Giordano beat out two vaunted finalists: San Jose's Brent Burns, who won it in 2017, and Tampa Bay's Victor Hedman, who won it last year.

The Calgary captain was instrumental in the Flames' breakthrough season, leading the NHL with a plus-39 rating while regularly playing against opponents' best lines. Giordano also scored a career-best 74 points and played more than 24 minutes per game.

Giordano is the fourth defenceman to win the Norris at 35 or older, joining Nicklas Lidstrom, Doug Harvey and Al MacInnis.

The 20-year-old Pettersson beat out St. Louis goalie Jordan Binnington and Buffalo defenceman Rasmus Dahlin for the award. Pettersson joins Pavel Bure (1992) as the only Calder winners in Canucks history.

Pettersson provided an offensive jolt to the Canucks in his first North American season, scoring a goal on his first NHL shot and seamlessly adapting to the world's best league. One year after Vancouver drafted him with the fifth overall pick in 2017, Pettersson posted a rookie-best 28 goals and 38 assists as a tremendous playmaker with a wicked shot.

Pettersson is the 31st player in NHL history to lead all rookies in goals, assists and points.

Nikita Kucherov already took home the Art Ross Trophy this season and he’ll now have to add the Hart Memorial Trophy to his collection as well.

Kucherov beat out fellow nominees Connor McDavid and Sidney Crosby to take home the award Wednesday night at the NHL Awards in Las Vegas. The award is given annually to the player judged to be most valuable to his team as voted on by the Professional Hockey Writers' Association.

Kucherov led the league with a career-high 128 points (41 goals, 87 assists) as the Lightning tied an NHL record with 62 regular season wins. It’s the most points ever recorded by a Russian-born player, breaking Alexander Mogilny’s record of 127 set with the Buffalo Sabres in 1992-93. Kucherov’s monster season also sets a new Lightning franchise single-season points record.

Kucherov becomes the second player in franchise history to win a Hart Trophy, joining Martin St. Louis from the 2003-04 season.

Earlier at the NHL Awards, he also won the Ted Lindsay Award as the league's most outstanding player, according to the NHL Players' Association members.

Andrei Vasilevskiy of the Tampa Bay Lightning has won his first Vezina Trophy as the NHL's top goalie.

Vasilevskiy led the NHL with 39 victories for the powerhouse Lightning, who took the Presidents' Trophy with 128 points. The Russian goalie had a 2.40 goals-against average and a .925 save percentage in 53 games.

He's the first Lightning goalie to win the Vezina.

Lehner had an outstanding season after revealing during training camp that he has struggled with addiction and bipolar disorder. He is the third player in Islanders history to win the Masterton Trophy.

"I'm not ashamed to say I'm mentally ill, but that doesn't mean mentally weak," Lehner said after accepting his award.

Barry Trotz has won the Jack Adams Award as the NHL's top coach.

Trotz beat out Tampa Bay's Jon Cooper and St. Louis' Craig Berube for the honour, which is based on regular-season performance. Trotz also won the award with Washington three years ago.

After winning the Stanley Cup and subsequently leaving the Capitals last summer, Trotz engineered an impressive one-season turnaround for the Islanders. New York went 48-27-7 for a 23-point increase from 2018 and its best single-season total since 1983-84, even after losing John Tavares to Toronto.

The award is given annually to the player voted to best combine sportsmanship, gentlemanly conduct and ability.

Barkov scored a franchise-record 96 points for the Panthers, yet he committed just four minor penalties while playing more than 22 minutes per game. The Finn was a Lady Byng finalist for the third time in four seasons.

He drew a few laughs when he apparently heard a few shouts in Finnish as he took the stage to accept his trophy.

"We have more fans from Finland than Florida here," Barkov said.

GM OF THE YEAR

Boston's Don Sweeney has been named the NHL's General Manager of the Year.

Sweeney has built a consistent winner since the longtime Bruins defenceman took over the front office in 2015. Boston reached the Stanley Cup Final this season, losing in seven games to St. Louis.

O'Reilly beat out Boston's Patrice Bergeron, a four-time Selke winner and a finalist for the eighth consecutive year, and Vegas' Mark Stone.

O'Reilly was the Blues' top scorer with 77 points, including 28 goals in his first season in St. Louis. He also compiled a plus-22 rating and finished fourth in the NHL with 94 takeaways while winning an NHL-best 1,086 faceoffs during the Blues' remarkable season.

The award is given to the player who best exemplifies leadership qualities on and off the ice and has made a noteworthy humanitarian contribution in his community.