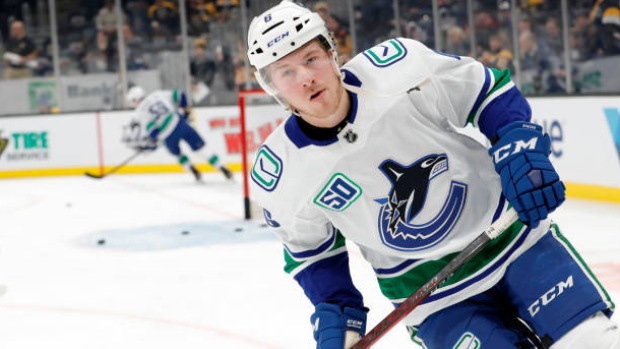 The team first announced the injury on Monday, stating the winger would be re-evaluated in three weeks. Benning said Tuesday, however, the injury was more serious than initially thought and Boeser may not play again in the regular season, which concludes for the Canucks on April 4.

Benning added the team will also be without winger Josh Leivo for the remainder of the regular season, though he could return for the playoffs. Leivo has been out since Dec. 19 due to a lower-body injury. He had seven goals and 19 points in 36 games prior to the injury.

Benning spoke to Toffoli’s agent last night and hopes to talk to him at the end of the year about staying long term.
Leivo will also miss the rest of the regular season. Could be back for playoffs. #canucks

Boeser has not played since leaving a Feb. 8 game against the Calgary Flames in the third period after getting tangled up in the neutral zone.

The 22-year-old has appeared in 56 games this season for the Canucks and posted 16 goals and 29 assists with a plus-5.

The Burnsville, Minn., native was selected 23rd overall in the first round of the 2015 NHL Entry Draft.

The Canucks acquired winger Tyler Toffoli from the Los Angeles Kings on Monday after first announcing Boeser's injury and adding that forward Micheal Ferland would miss the remainder of the season with recurring concussion-like symptoms. The team dealt forward Tim Schaller, prospect Tyler Madden, a 2020 second-round pick and a conditional fourth-round selection in 2022 for Toffoli.

The Kings will receive the conditional fourth-round pick if Toffoli, a pending unrestricted free agent, re-signs with the Canucks. Benning said he spoke to Toffoli's agent after the trade and hopes to speak to the winger at the end of the season about signing long-term in Vancouver.

Boeser and Leivo was the other way to attack the LTIR cap puzzle, as we hinted last night. With Boeser possibly out for the rest of the regular season, #Canucks have the same option to pursue with the "Kane Loophole" idea that we wrote about here -https://t.co/AcwIN2DMHe https://t.co/7QIbTKARLP