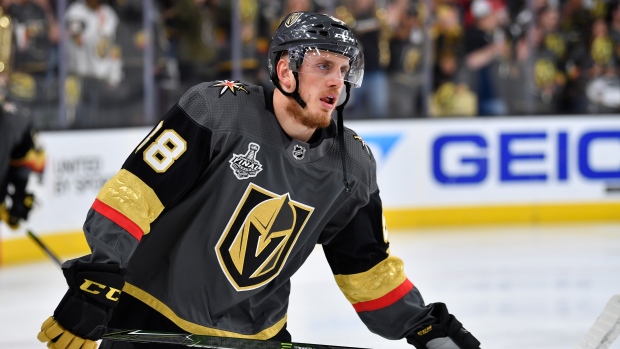 Vegas Golden Knights defenceman Nate Schmidt will miss the first 20 games of the season after he was suspended for violating the NHL's performance-enhancing substances policy.

It's the league's first suspension under the policy since Jarred Tinordi in 2016 and just the fifth since the most recent collective bargaining agreement went into effect in 2013. Schmidt, his agent and the Golden Knights criticized the punishment and questioned its merits.

"It is difficult to accept this suspension," Schmidt said Sunday in a lengthy statement. "I understand that I will miss these games, but I do not agree with the suspension and I will not accept being labeled a cheater."

Schmidt can take part in training camp, but is ineligible for preseason games. The earliest he can return is Nov. 18 at Edmonton.

"It was utterly shocking to be informed that I tested positive for a microscopic amount of a tainted substance," Schmidt said. "Not only did I not intentionally take a banned substance, I could not have received any performance enhancement benefit from the trace amount that inadvertently got into my system at a level that was far too small to have any effect."

The 27-year-old Schmidt said an expert in environmental contamination who testified on his behalf at the appeal hearing likened the amount of the banned substance to a pinch of salt in an Olympic-sized swimming pool. Schmidt said he only takes supplements given to him by his NHL team and has never tested positive before.

The Golden Knights said they disagree with the suspension and "firmly believe that the presence of a trace of the banned substance was accidental and unintentional."

Agent Matt Keator said Schmidt "is innocent and this is a wrong decision."

"He would never risk his principles by taking performance-enhancing drugs," Keator said in a text message to The Associated Press. "There was no intentional use of a banned substance which is backed up scientifically."

The 6-foot-1, 194-pound Schmidt led the Golden Knights in ice time last season at 22:14 a game. He had 36 points during the regular season and seven during Vegas' run to the Stanley Cup Final.

"I'm extremely proud to be a player in the NHL. I have never cut corners in order to achieve this goal," Schmidt said. "I can't put into words how disappointed I am that I will not be on the ice at the beginning of the season to help my teammates work towards another Stanley Cup run."

Schmidt is entering his fifth NHL season after the Washington Capitals signed him as an undrafted free agent out of the University of Minnesota. He has 79 points in 276 career regular-season games with the Capitals and Golden Knights.