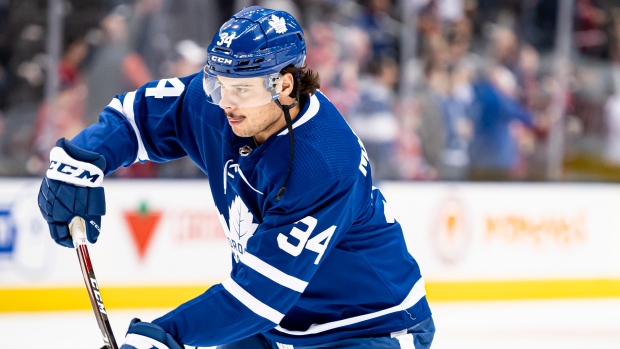 TORONTO – Until a few months ago, Auston Matthews didn’t have much of a one-timer in his offensive arsenal. But necessity is the mother of invention, and when the Maple Leafs’ decided to revamp their power play with the left-handed Matthews on his off-side, the centre had to learn a new trick.

“It's a lot harder of a shot than you really think of,” Matthews said after the Leafs’ optional morning skate on Thursday, ahead of facing the Tampa Bay Lightning. “I never really took them before and then this year we switched [sides] and I tried to work on it over the summer. It’s not easy. I think [mine is] all right; still kind of getting a feel for it.”

The early returns off Matthews’ one-timer suggest he’s got a good handle on it. He pocketed the Leafs’ first power-play goal in their regular-season opener with that right-side shot, and then added another one-timer power-play score against Columbus two nights later. That accounts for 50 per cent of the Leafs’ goal-scoring production with the extra man this season (4-for-17, 23 per cent).

Mitch Marner has also switched to his off-wing on the power play and is attempting to establish his own one-timer, but he hasn’t had Matthews’ success out of the gate. While his progress with the new shot has been positive, Matthews still feels there’s a long way to go towards mastering the craft.

“[Getting the] timing, that’s probably the biggest thing,” Matthews said. “And then accuracy. There are a lot of things going on with it.”

Matthews said he’s long admired those in the NHL who can rifle the one-timer best, like Capitals sniper Alex Ovechkin and Lightning captain Steven Stamkos. Now he watches those same players a little differently, with a better understanding of how much poise and control goes into the task.

“It gives you an appreciation for the guys that have been doing it for quite some time,” Matthews said. “Guys that made it their trademark, that can really just pick the corner anytime they're unleashing one of those things. I think it's good for [Marner and me] to see that and try to improve on that area. And on that power play, just be dual threats and open up different areas where we can score goals.”

Toronto started out last year red-hot with the extra man, boasting the third-best power play in the NHL (29 per cent) after two months, but that production tapered off dramatically, and the Leafs ranked 15th in the league (18.9 per cent) from Dec. 1 to the end of the regular season.

Those units are now under the tutelage of new assistant coach Paul McFarland, who coached the Florida Panthers to the NHL’s second-ranked power play the past two seasons.

Defenceman Morgan Rielly said he can already feel a difference in how the Leafs’ top group, made up of him, Matthews, Marner, John Tavares and Andreas Johnsson, is operating thanks to McFarland’s new one-timer wrinkle.

“It’s tough [to defend], especially on the power play,” Rielly said. “When you look around the league at the power plays, there are a lot of options that a player in that position has with a one-timer, which we didn't have last year because [Matthews and Marner] played their strong sides. But this year to have that, it’s a nice change.  I know [Matthews] enjoys taking them, so he's going to keep working at it.”

Matthews’ contributions may draw more attention for elevating the Leafs’ power play so far, but Johnsson’s net-front presence has also played a key role in what their unit has accomplished.

“If you look at a lot of the goals Matthews has scored, the goalie hasn’t seen it,” said Mike Babcock. “I’m not taking anything away from Matty’s shot, but [Johnsson’s] been there [at the net] and he's done a really nice job.”

“When we get good screens like what Johnny has been doing, it’s tremendous,” added Tavares, “because with Auston being able to get off quick as he can, it's so difficult to stop and track. And even if it doesn't go in, the goalie is racing to get across and just causes confusion and good second and third opportunities because he can't control where it's going.”

Matthews is still hoping to develop more control when it comes to the one-timer, but after only four games of unloading it, the 22-year-old is intrigued by the possibilities.

“It really is a tough shot and still something I'm trying to improve on and Mitch [Marner] is as well,” he said. “But especially on that power play, to open up that seam and open up those areas for us that we can actually get that one timer off and be as accurate as possible [will be great].”