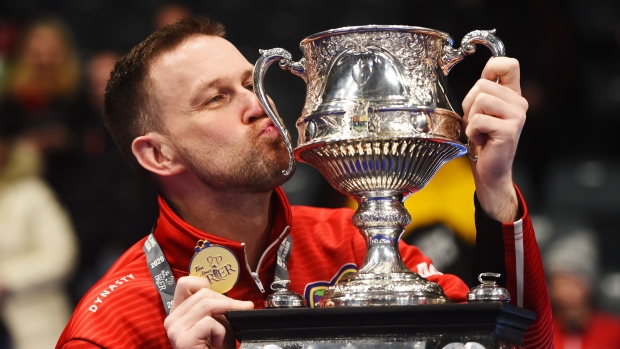 A three-time Brier winner, Gushue is looking to join Ernie Richardson, Kevin Koe, Randy Ferbey and Kevin Martin as the fifth skip ever to win four Tankards. Epping, alongside lead Brett Laing, second Mathew Camm and third Ryan Fry, is entering his third Brier and is looking for his first trophy.

Three other draws (QC vs. NL, WC2 vs. NS and NU vs. SK) will take place on Friday night before pool play gets into full swing Saturday with three featured matchups each day at 10:30am ET, 3:30pm ET and 8:30pm ET.

Like the Scotties, this year's Brier will be held in Calgary at the Markin MacPhail Centre that is eliminating fan attendance due to COVID-19. It is the second of several bonspiels to be held in a bubble-setup at Canada Olympic Park. It was also announced Friday morning that the LGT World Women’s Curling Championship will take place at the Olympic Park bubble from April 30 to May 9.

Gushue won his first Brier at a sold-out Mile One Centre in his hometown of St. John's, N.L. Needless to say, Tankard or no Tankard, things will be different this year.

"It's going to be interesting and really I have no idea what to expect," Gushue said earlier this week. "I think once we get through the first weekend, you'll probably settle in and know the level (everyone) is at and then you just kind of accept it and battle it out."

Eighteen teams from across Canada will compete in the preliminary round scheduled to run through March 11. The playoffs will wrap up with a champion crowned three days later.

The Brier winner will represent Canada at the world men's curling championship in the Calgary bubble scheduled for April 2 to April 11.