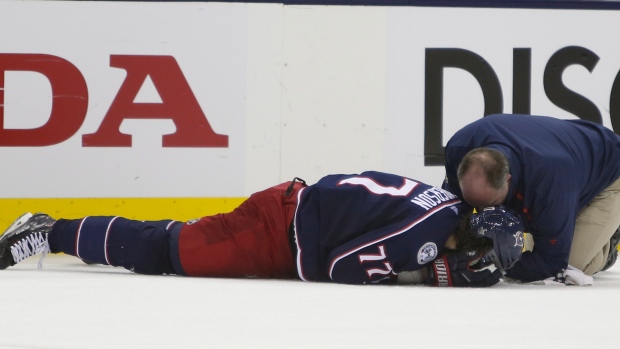 Boston Bruins defenceman Charlie McAvoy has been suspended one game for an illegal check to the head of Columbus Blue Jackets forward Josh Anderson Monday night, the NHL’s Department of Player Safety announced.

Boston’s Charlie McAvoy has been suspended for one game for an Illegal Check to the Head on Columbus’ Josh Anderson. https://t.co/17QswFLyfI

McAvoy received a two-minute minor for an illegal check to the head on Anderson late in the second period of the Bruins' series-winning 3-0 victory over the Blue Jackets.

The defenceman put his shoulder into Anderson’s head as the Blue Jackets’ forward was crossing the Bruins’ blueline with the puck.

The Bruins beat the Blue Jackets 4-2 in their second round series and the suspension means he will miss the opener of the Eastern Conference Final against the Carolina Hurricanes.

"When you see the rule 48.1.1 and what a legal check to the head is, Charlie McAvoy is taking the good angle, he’s trying to come through the body, where he runs himself into a problem is if you look at the (line) unnecessary extension of the body upward," explained TSN's Craig Button.

In 13 games so far this postseason, McAvoy has one goal and five assists.

Boston will begin their series with Carolina on Thursday night.