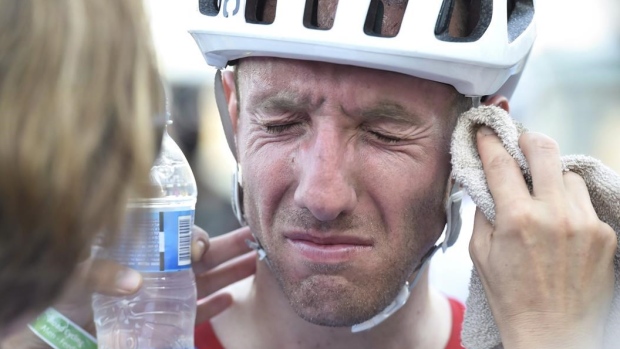 Delayed due to the global pandemic but still taking place under the spectre of COVID-19, this year's Tour de France promises to be like no other.

For Canadian cyclist Michael Woods, who will be watching from the sidelines, the 2020 Tour will be more demanding than usual right from the get-go.

"I have said if I were to miss any Tour, this would be the one in a lot of ways," Woods told The Canadian Press. "Although the course is really good for me, I think it's also going to be mentally a really weird Tour just with everything going around the Tour.

"With COVID. And with all of the focus of the world of cycling being on this race because it's so crucial to sponsors. If this race doesn't make it to the end, a lot of sponsors could potentially leave, pull out of cycling. So there's just so much more pressure on every rider this year.

"And with a couple of teams on the brink, that may not continue next year, riders are going to be that much more desperate. So it's just this perfect storm of crazy that's going to result in a high-stakes Tour, lots of stress and likely some big crashes. We've already seen this year some really big crashes in the opening weeks of racing. Awful crashes ... It's going to be a hectic Tour."

Woods, who finished 32nd in last year's Tour despite a broken rib after several crashes, has a new role in this year's race.

The 33-year-old from Ottawa, who is leaving the EF Education First team for Team Israel Start-Up Nation next year, will be serving as an ambassador for FloBikes, the streaming platform that has exclusive rights to show the race in Canada.

The Tour traditionally takes place in July but was pushed back because of the pandemic. Teams face possible expulsion from the race if two or more of their riders and staff test positive for COVID-19.

The Lotto Soudal cycling team has already had to send home several staff members — a mechanic and a member of the rider support staff along with their roommates — after "non-negative" coronavirus tests.

Woods is already sitting this one out.

"It's going to be tough not being there but this is kind of the best way to be involved with it," said Woods, who will be hosting watch parties with fellow Canadians Alex Stieda and Svein Tuft during the FloBikes coverage.

Woods said he was told he would not be part of the EF Education Tour team prior to announcing he was leaving. His next race is the rescheduled Tirreno–Adriatico that starts Sept. 7 in Italy before competing in the UCI Road World Championships in Switzerland, if they happen.

Woods was sidelined earlier this year when he broke his femur in a high-speed crash March 12 in the Paris-Nice race, just before the COVID-19 pandemic shut down the cycling world. He has competed in three races since his return to health — Strade Bianche, Milan–San Remo and Il Lombardia.

With the race schedule rejigged due to the pandemic, the summer heat took its toll on Woods.

"Physically I'm all there. I'm just still getting some cobwebs out of the race legs," he said.

The races also took a toll mentally. He spent a month on the road, away from his wife and baby daughter.

The sporting landscape is further disrupted by protests over racial inequality and police violence. Woods says the ripple effect of those will be felt by the riders.

"It's very, very hard to be a robot. I follow the news every day and I see what's happening. It's difficult to remove myself from that, to focus on the sport because there are bigger things at play."

This year's Tour does not feature a team time trial. There is just one individual time trial, covering 36 kilometres, in the penultimate stage.

Heat should be less of a factor for the Tour although Woods expects more rain than usual because of the shift in scheduling.

Defending champion Egan Bernal of Colombia, part of Team Ineos (formerly Team Sky), is expected to challenge again along with Primoz Roglic of Slovenia and Dutch rider Tom Dumoulin, who both ride for Team Jumbo–Visma.

Roglic, who was fourth in the 2018 Tour, crashed in the Criterium du Dauphine but has recovered. Woods believes, if healthy, he could be the man to beat. Dumoulin was runner-up in 2018.

The lone Canadian competing is Hugo Houle, a support rider for the Astana Pro Team. The 29-year-old from Sainte-Perpetue, Que., finished 91st in last year's Tour.

"Hugo's an exceptional rider. One of the best domestiques in the World Tour," Woods said of his good friend. "He's certainly going to be playing a role for Astana leader Miguel Angel Lopez."

Woods will join Froome at Team Israel Start-Up Nation. Froome, a four-time Tour de France winner, is not part of the Team Ineos roster for the Tour. The Brit, who is coming back from injury, will instead focus on the Spanish Vuelta in October.

Also missing for Team Ineos is Geraint Thomas, the 2018 Tour winner. He has been given the lead role for the Giro d’Italia, also in October.

The Jumbo-Visma team lost Dutch rider Steven Kruijswijk to a crash in the Criterium du Dauphine.

Founded in 2014 as the Israel Cycling Academy, Team Israel Start-Up Nation is co-owned by Canadian-born Sylvan Adams, a former Canadian Masters cycling champion who emigrated to Israel in 2015.

Woods' cycling resume include a victory in the 2019 Milano-Torino one-day race, a stage win at the 2018 Spanish Vuelta, a bronze medal in the road race at the 2018 world championships and a second place at the historic Liege-Bastogne-Liege one-day race in Belgium in 2018.

A subscription to FloBikes costs US$150 a year. That allows access to the entire FloSports network including hockey, track and field, wrestling and grappling among others.

This report by The Canadian Press was first published Aug. 27, 2020.