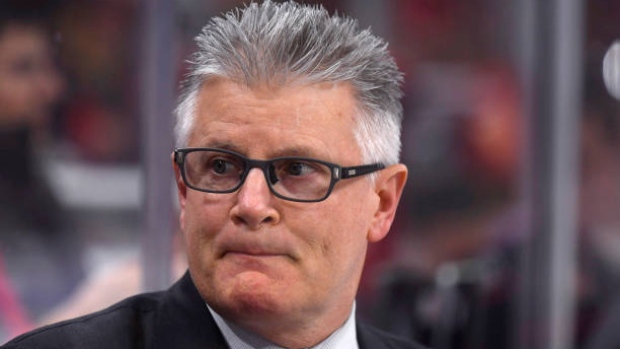 CHICAGO — Blackhawks assistant Marc Crawford will be away from the team while it reviews his conduct with another organization.

The Blackhawks didn’t provide any details Monday about what they are examining, but former NHL forward Sean Avery recently told the New York Post that Crawford kicked him after he was whistled for a too-many-men-on-the-ice penalty when he played for Crawford with the Los Angeles Kings during the 2006-07 season.

The team said it will have no further comment until the review is completed.

Marc Crawford will be away from the team during this time and the organization will have no further comment until completion of the review. #Blackhawks

“The Chicago Blackhawks will be conducting a thorough review of assistant coach Marc Crawford based on the recent allegations that have been made regarding his conduct with another organization,” the Blackhawks said on Twitter. “Marc Crawford will be away from the team during this time and the organization will have no further comment until completion of the review.”

After Chicago announced its probe, Avery posted on Twitter that Crawford “was a demanding coach who would actually fight for his players.” He also posted that Crawford provided an opportunity for him “to become a better player and teammate” even though Avery was difficult.

After an exhausting investigation the ”AVERY REVIEW” has concluded that Mark ”The Crow” Crawford was a demanding coach who would actually fight for his players and gave Mr. Avery a great opportunity to become a better player and teammate even though he was an unmanageable ”Ass”. https://t.co/AjZjoh9lA4

The issue with Crawford comes after Calgary Flames coach Bill Peters resigned Friday following accusations he directed racist slurs at a Nigerian-born player with one of Chicago’s minor league teams a decade ago. Others claimed Peters kicked and punched players behind the bench during his recent time with Carolina.

Akim Aliu said Peters “dropped the N bomb several times towards me in the dressing room in my rookie year because he didn’t like my choice of music.” It happened during the 2009-10 season while the two were with the Blackhawks’ top minor league affiliate in Rockford.

The 58-year-old Crawford joined coach Jeremy Colliton’s staff in June. He was the interim head coach for Ottawa at the end of last season. He also has served as the head coach for Colorado, Vancouver, Los Angeles and Dallas, leading the Avalanche to the Stanley Cup title in 1996.

Speaking on a Barstool Sports podcast a year ago, former NHL defenceman Brent Sopel said Crawford “kicked me, he choked me, he grabbed the back of my jersey and just pulling it back.” Sopel played for Crawford in Vancouver.

“I understand the reason for a review,” Colliton said after Monday night’s 4-0 loss to St. Louis. “I can only speak for my time with Marc. He’s been excellent. I’ve really enjoyed that he’s added a lot to our group and our staff and our players. I’ll leave it at that.”