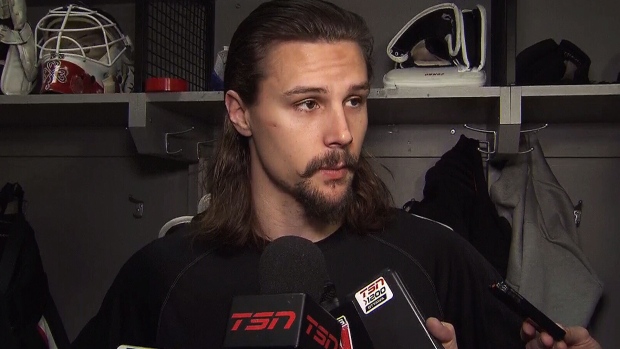 Erik Karlsson was still an Ottawa Senator after the NHL trade deadline and hopes to remain one for many more years.

The star defenceman was the centre of trade speculation for weeks ahead of Monday's deadline but the club reportedly never came close to dealing the two-time Norris Trophy winner.

Karlsson, who can become an unrestricted free agent after the 2018-19 season, now hopes to sign a new deal to stay in Ottawa. Talks on a contract extension cannot begin until July 1.

"I've been here for a long time," the nine-year Senator told reporters in Washington prior to Ottawa's road game versus the Capitals on Tuesday night. "I've made Ottawa my home and it's always going to be my home.

"When that time comes, I hope there's a place for me in the future."

The 27-year-old, who said he didn't ask to be dealt. had never been involved in trade talk before. He didn't like it.

"It's been an extremely stressful time for me and my family," he said. "I have a wife that's halfway through a pregnancy.

"We just bought a home in Ottawa, so it's been a new experience for me and for everybody that's close to me.

"I never wanted to leave. That's a different part of the business that I can't control. Hearing your name being thrown around as much as it was is very stressful and not something I enjoyed going through. I love it here and I've always loved it here."

Speculation on Karlsson's future is likely to start up again in the summer, particularly leading up to the NHL draft in June in Dallas. GM Pierre Dorion has said he plans to offer Karlsson an extension July 1 if he's still Ottawa property.

Karlsson said he'll worry about that when the time comes. For now, the Senators captain is relieved to go back to concentrating on playing hockey.

Karlsson said he has felt back in top form since December after undergoing surgery to repair torn tendons in a foot last summer.

"I'm just going to worry about finishing this season as good as possible and try to make sure that some of the younger guys that are going to have regular spots next year are as comfortable as possible for when we start up next year," he said. "There's been a lot of changes made here recently and I'm sure there's going to be a lot more as we head into the summer.

"Where that's leading, I don't know. I can't speculate on that, so there's no point for me to worry about that right now."