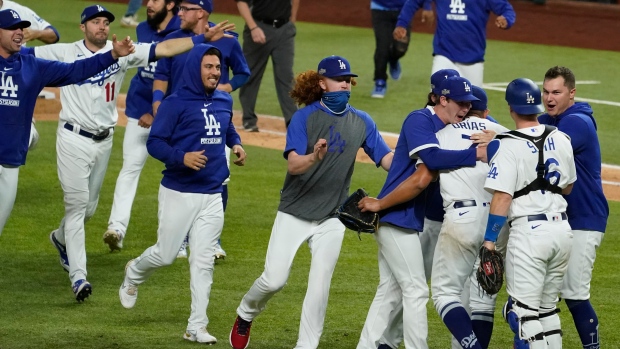 ARLINGTON, Texas — The Los Angeles Dodgers celebrated as Cody Bellinger’s drive soared deep into the Texas night. Bellinger flung his bat off to the side and strutted up the first-base line.

All the way to the World Series.

Bellinger hit a tiebreaking solo homer in the seventh inning, and the Dodgers advanced to the Fall Classic for the third time in four years by topping the Atlanta Braves 4-3 in Game 7 of the NL Championship Series on Sunday.

"This year is our year,” manager Dave Roberts said.

Bellinger connected an inning after Kiké Hernández became the first pinch hitter with a game-tying or go-ahead homer in a winner-take-all-game. His homer tied it at 3 and, like Bellinger's, came on the eighth pitch of the at-bat.

The Dodgers, who matched an LCS record with 16 homers, overcame a 3-1 series deficit by winning three consecutive games when facing elimination for only the second time in their storied history.

“Defensively, pitching, game-calling, planning, everything. we grinded all the way through this series,” said shortstop Corey Seager, who was named NLCS MVP after bashing a record five homers in the series. “We’re glad to be on top.”

After winning both their NL Division Series and the NLCS in the new $1.2 billion Globe Life Field, the Dodgers get to stay in place for the World Series. Game 1 against the American League champion Tampa Bay Rays is Tuesday night.

Julio Urias closed with three perfect innings as the Dodgers won their 24th NL pennant, their 12th since moving to Los Angeles. They are coming off their eighth consecutive NL West title.

It was the 16th consecutive playoff appearance in which Atlanta did not win a World Series, the most for any team.

But these Braves have won three consecutive NL East titles and have a bunch of young players surrounding NL MVP candidate Freddie Freeman, who had never been to the NLCS in his previous 10 seasons in Atlanta.

“We’re taking strides in the right direction. And we did it with our young players and the experience they got,” manager Brian Snitker said. “A lot of our young players grew up a lot in these last three months.”

The Dodgers are once again going for their first World Series title since 1988. They lost Game 7 at home three years ago to to the Houston Astros, and then lost in five games to the Boston Red Sox in 2018 when Mookie Betts was the AL MVP and playing against Los Angeles.

Tampa Bay’s win in Game 7 of the ALCS late Saturday night wiped out the chance for an October rematch with the Astros, whose 2017 World Series victory over the Dodgers has been heavily tarnished by the revelations of Houston’s sign-stealing tactics that season.

Betts, the first-year Dodger signed for 12 more years, made another incredible defensive play, robbing Freeman of a solo homer in the fifth. He had run-saving plays in all three of their potential elimination games.

“This is really the first time we’ve had our backs against the wall,” Betts said. “It seemed like we were getting handled a little bit early on. We were able to get a hold of ourselves and fight back. We’re never going to give up."

Urias, the fifth Dodgers pitcher, got his fourth win in four appearances this post-season. The 24-year-old right-hander, already in his fourth post-season, has a 0.57 ERA in these playoffs.

“That’s his moment right there. That was his game to win and he went out there and did it,” Seager said.

The massive shot to right by reigning NL MVP and 2018 NLCS MVP Bellinger came on a 94-mph sinker after fouling off three pitches in a row by Chris Martin, the fifth Braves pitcher who started the seventh with strikeouts of Max Muncy and Will Smith.

Hernández led off the sixth with a 424-foot drive to left-centre off A.J. Minter.

“Game 7 of the NLCS, win or go home, I was ready from first pitch of the game on. Mentally prepared, physically ready, envisioning AB situations,” Hernández said.

Dansby Swanson homered for Atlanta, which hasn't been to the World Series since 1999.

Before the late drama, it was the first winner-take-all game in post-season history matching rookie starters.

The Dodgers scored twice in the third to tie it at 2, the first runs allowed by Ian Anderson in his four post-season starts — the 22-year-old right-hander started only six games for Atlanta in the regular season. His scoreless streak of 17 2/3 innings was the third-longest to start a post-season career.

Justin Turner drew a two-out walk, Muncy doubled and Will Smith bounced a two-run single through the open gap near second created by the defensive shift.

The Dodgers' Dustin May became the first pitcher to walk the first two batters in a winner-take-all-game — and the 23-year-old from nearby Justin, Texas, did so without throwing a strike to Ronald Acuna Jr. or Freeman. The Braves didn’t even swing at a pitch until Marcell Ozuna’s sharp single through the left side of the infield on an 0-1 curveball for a 1-0 lead.

“We believed we should have been in the World Series,” Freeman said. “It’s just the Dodgers came, and they won three games in a row. I feel like you can hang your head high. We gave it everything we had.”

The Braves had just taken a 3-2 lead on Austin Riley’s RBI single when the Dodgers turned an unconventional double play in the fourth. With runners on second and third, and the infield playing back, Nick Markakis hit a hard grounder to third baseman Justin Turner. Swanson got caught in a rundown between third and home. He was tagged out when Turner dived at him before getting up and throwing to Seager at third to get Riley.

Asked about momentum changes in the game, Roberts said that play “started it, to kind of keep the game where it was at.”

Swanson became the 14th different player to homer in the series, the most ever in an NLCS. He was the sixth Atlanta player to go deep, while the Dodgers had eight. ... The teams combined to hit 25 homers, tied for the second-most in any LCS.