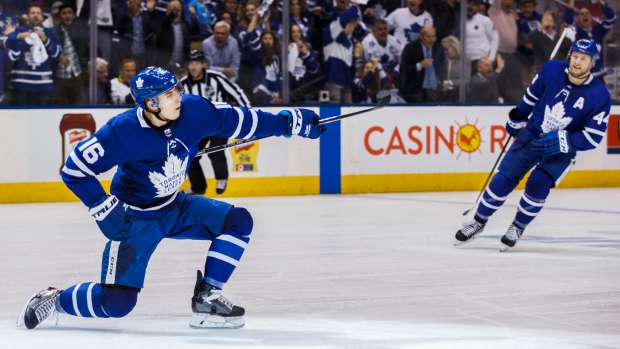 Coming off an impressive 69-point campaign to lead the Toronto Maple Leafs, right winger Mitch Marner has set his sights on being taken more seriously within the Leafs' dressing room and shedding his child-like persona.

"I want to be taken more seriously, I guess you could say," Marner told media at the Marner All-Star Invitational on Thursday night. "I love the jokes about getting called a five-year-old and six-year-old and all that stuff, as I find it very amusing and funny, but obviously I want to be taken a bit more seriously [in the locker room] and taking even more upon myself.

"I think all young guys do [want to be taken more seriously], we all want to put more pressure on ourselves and be better every single night and going forward that's what we have to do."

Not only does Marner want to take the next step, but the 21-year-old is aware that the Leafs also need to take the next step in their quest for the team's first Stanley Cup since 1967. After two first-round exits in the past two seasons, it is not something the Markham, Ont., native wants to repeat for a third year.

"We obviously have a lot to prove this year," Marner said. "[In the past] we were happy with just getting into the playoffs, but after back-to-back first-round exits, it's obviously something we don't want to keep doing and this is the year that we have to step up our game to another level and challenge each other and like I said, we're excited for this moment."

Much of the newfound buzz and excitement surrounding the Leafs' Stanley Cup hopes in 2018-19 stems from the team making a huge splash on July 1, signing highly coveted free agent John Tavares to a seven-year deal to be the possible missing piece in the championship puzzle.

"We're all excited to have [Tavares] on our team," Marner said. "He adds a lot of depth to our centremen that are already very deep, so regardless of what line you play on, you have the potential to be successful."

Whether Marner plays on a line with Tavares or not is yet to be determined, but the Leafs' top winger has his own goals to focus on to be improved for the upcoming season.

"I'm more focusing on being smarter with the puck this year and when opportunities come, shoot a little bit more," Marner explained. "Obviously, by the end of the year I got into more of a shooting role and I know [John Tavares] is very good at making plays and getting people open and I'm excited to have that."