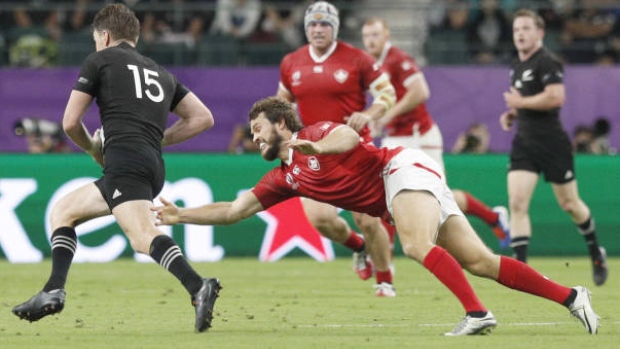 Winger Taylor Paris has become the third Canadian to exit the Rugby World Cup due to injury.

The 26-year-old from Barrie, Ont., came on as a replacement in Canada's 63-0 loss to New Zealand on Wednesday in Oita, Japan, but was forced off after a concussion.

Rugby Canada said he will be replaced on the World Cup roster by Toronto Arrows winger Kainoa Lloyd. No stranger to World Cup heartbreak, Paris missed the 2015 tournament after suffering a knee injury on the eve of the competition.

The Canadian team has already lost centres Nick Blevins and Ben LeSage to injury. They were replaced by Guiseppe du Toit and Theo Sauder after suffering a fractured jaw and hand injury in Canada's opening 48-7 loss to Italy.