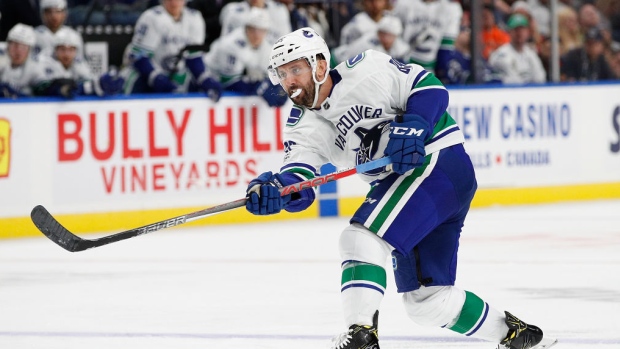 Sam Gagner is back with the Edmonton Oilers, the team with which he spent the first seven seasons of his NHL career.

The Oilers acquired Gagner in a deal Saturday with Vancouver that sent centre Ryan Spooner to the Canucks. The Oilers expected to have the 29-year-old Gagner for their road game against the New York Islanders on Saturday night.

"We've liked Sam to be a part of our club," Oilers assistant GM Keith Gretzky said on the team's website. "He can add experience in the locker-room and we think he can help us on our power play."

The Oilers selected Gagner sixth overall in the 2007 draft, and the 29-year-old posted five consecutive seasons with 41 or more points to start his NHL career.

He's spent most of this roller-coaster season however on loan to the Toronto Marlies, scoring 12 goals and picking up 37 points in 43 AHL games.

"It's a great situation for us and for himself," Gretzky said. "He wants to play in the NHL and he's going to get an opportunity. I feel that he's going to help our hockey club."

The deal comes less than a day after the Oilers sent Cam Talbot to Philadelphia for fellow goalie Anthony Stolarz.

Meanwhile, Vancouver is the third NHL stop this season for Spooner, who has split his 2018-19 campaign between the New York Rangers, Oilers and Bakersfield Condors.