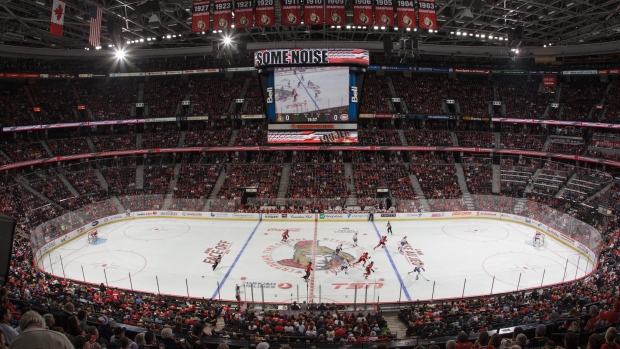 OTTAWA — The NHL and the Ottawa Senators have postponed the team's next three games due to an ongoing COVID-19 outbreak.

The league made the announcement on Monday, saying in a release that the Senators' games will be postponed through at least Saturday.

Ottawa was scheduled to visit the New Jersey Devils on Tuesday, host the Nashville Predators on Thursday, and welcome the New York Rangers on Saturday.

The Senators have had 10 players test positive for COVID-19 in the past 10 days.

Ottawa cancelled its practice on Monday to try and contain the outbreak.

Forward Drake Batherson was the most recent Senators player to be put in the NHL's COVID-19 protocol when he was added to the list on Sunday.

The Senators said in a release that tickets purchased for Thursday and Saturday will be honoured when the games are rescheduled.

It's the second straight season a Canadian team has dealt with significant COVID-19 issues. A massive outbreak derailed the Vancouver Canucks' 2020-21 campaign.

Canucks forward Adam Gaudette was pulled from practice on March 30 after testing positive for COVID-19, the first of 22 Vancouver players and four staff members who were stricken by the virus, including head coach Travis Green.

Vancouver ultimately had nine games postponed over 19 days. When they returned to play, they lost seven of their final 10 games of the season, finishing last in the all-Canadian North Division.

Here is the full statement released by the league:

The National Hockey League announced today that as a result of 10 Ottawa Senators Players currently in the NHL’s COVID Protocol, and evidence of continued spread in recent days, the team’s games will be postponed at least through Saturday, Nov. 20. The decision was made by the League’s, NHLPA’s and Club’s medical groups.

As an appropriate precaution, the team’s training facilities have been closed, effective immediately, and will remain closed for Players until further notice. The League is in the process of reviewing and revising the Senators’ regular season schedule.

The Senators organization has, and will continue to follow, all recommended guidelines aimed at protecting the health and safety of its Players, staff and community at large as set by the NHL, local, provincial and national agencies.