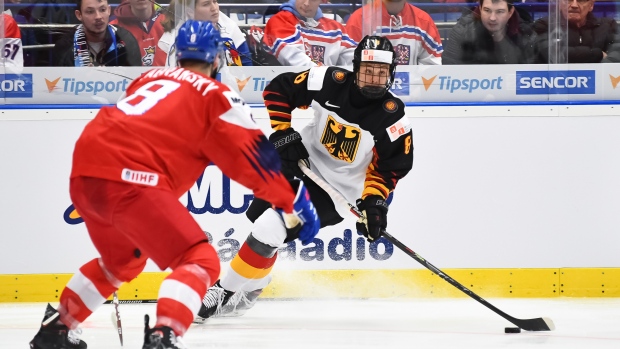 After the New York Rangers do the expected by taking Alexis Lafreniere with the first-overall pick of the 2020 NHL Entry Draft, our final 31-team mock draft has Sudbury Wolves centre Quinton Byfield going next to the Los Angeles Kings.

Byfield’s size (6-foot-4 1/4 and 215 pounds) is such an important part of his game - not only from a skill point of view, but in his ability to impact the game in all its areas. His completeness and competitiveness stand out in his 200-foot game and he has the tools to develop into a two-way star centre in the mould of Anze Kopitar.

The Ottawa Senators’ first of two top-five picks starts with German pivot Tim Stutzle at No. 3. He’s a dazzling and creative centre with an array of skills that allow him to impact the game at a significant manner. Stutzle is immediately dangerous to opponents when he has the puck and reminds me of Blackhawks sniper Patrick Kane.

The Sens then go with winger Lucas Raymond, a player with a sublime and stealth skill set. His hockey sense is two-to-three steps ahead and he also has a lot of creativity to make different sorts of plays. He has the makings of a No. 1 playmaking right winger in the mould of Mitch Marner.

The Winnipeg Jets have the 10th overall pick and take hometown boy Seth Jarvis, whose playing style is comparable that of Tampa Bay playoff hero Brayden Point. The Portland centre finished second in WHL scoring with 42 goals and 98 points in 58 games, won league most sportsmanlike player honours and earned a place on the Western Conference first all-star team.

With the 14th overall selection, the Edmonton Oilers snap up 67’s winger Jack Quinn. The best goal-scorer in the draft, Quinn went from 12 goals in his rookie season to 52 in 2019-20. One thing to keep in mind: If the highly- outed Yaroslav Askarov were somehow to fall this spot, I would have Edmonton choosing the Russian goaltender.

The Kasperi Kapanen trade to Pittsburgh gave the Toronto Maple Leafs the 15th overall pick and I’m going with Brandon’s Braden Schneider, a competitive right-shot defenceman in the mould of Jacob Trouba. If Toronto decides not to go for a blueliner, edgy two-way Brandon centre Ridly Greig would be a good fit. His comparable? Ex-Leaf Nazem Kadri.

At No. 16, the Montreal Canadiens take Chicoutimi Sagueneens winger Dawson Mercer – an all-around force who won’t just score goals, but set them up as well. If the native of Bay Roberts, Nfld., were to be drafted by Montreal, it would be the second straight year a Newfoundlander is picked No. 16, following in the skateprints of St. John’s native Alex Newhook, who was selected by Colorado.

The Calgary Flames are at No. 19 and I like them picking Halifax defenceman Justin Barron. He brings heady play, puck-moving skills and a good all-around game. He missed three months of the 2019-20 season with a blood clot and returned to play seven games before the pandemic pause. He will have the opportunity to play two more games before Tuesday’s draft, with the Mooseheads playing back-to-back today and Saturday against Cape Breton.

The Senators round out the Canadian teams in Round 1 with their third pick and take German winger John-Jason Peterka. He’s smart, can skate and is always in the right spot at the right time to produce offence. He can also fit seamlessly in multiple situations with different players.

Check out our full 31-team final mock draft below: