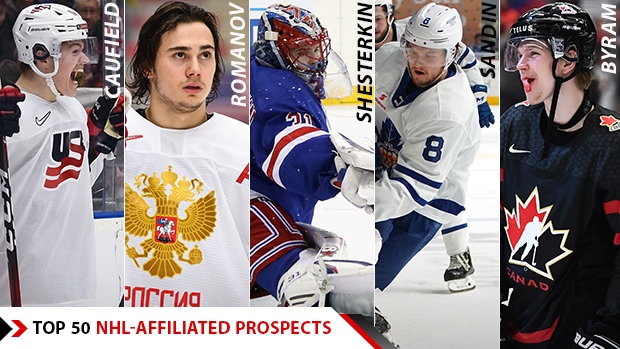 Emerging Russian players dominate the top of the 2020 edition of TSN Hockey’s list of the Top 50 NHL-affiliated prospects, taking four of the first five spots in our annual rankings.

Only players considered to have not achieved full-time NHL status are included in the list.

New York Rangers goaltender Igor Shesterkin, who dominated the AHL with a 1.93 goals-against average and .932 save percentage in 23 starts for the Hartford Wolf Pack before being recalled on Jan. 6, takes top spot this year after being 10th in last year’s rankings.

Shesterkin gave up two goals on Colorado's first three shots in his NHL debut Tuesday night before settling down to finish with 29 saves in a 5-3 win over the Avalanche.

He has all the tools necessary – skill, poise, sense and technical ability – to be a success at the NHL level and is the heir apparent to Henrik Lundqvist on Broadway.

Shesterkin is joined in the top five by Florida Panthers prospect Grigori Denisenko (No. 2 for a second consecutive year), a 19-year-old Lokomotiv Yaroslavl right wing who had nine points (three goals, six assists) in seven games for Russia at the World Juniors; Minnesota Wild property Kirill Kaprizov (No. 3), a 22-year-old CSKA Moscow left winger who has 37 points (19 goals, 18 assists) in 39 KHL games this season; and defenceman Alexander Romanov (No. 5), a 20-year-old Montreal Canadiens prospect who is also playing for CSKA Moscow this year.

Romanov showed what a bold player he can be at the World Juniors, commanding games with his hockey IQ, enthusiasm, competitiveness and skill level. He brings tremendous confidence to the ice, initiating plays instead of waiting for the action to come to him.

The lone non-Russian in the top five is 18-year-old Canadian defenceman Bowen Byram (No. 3), the fourth-overall pick by the Colorado Avalanche in 2019 who is currently playing for the Vancouver Giants of the WHL.

Elsewhere in the top 10, Toronto Maple Leafs defence prospect Rasmus Sandin jumped 20 spots from last year, landing at No. 6 in these rankings.

The 19-year-old opened the season by playing in six games for the Leafs before being sent back to the AHL Marlies. He was also a huge part of Sweden’s run to a bronze medal at the World Juniors, serving as an alternate captian and scoring 10 points (three goals, seven assists) in seven games.

Sandin makes plays in every single area of the game and in all situations. He mixes an exceptional hockey IQ with a lightning-quick processor.

The rest of the top 10 consists of Arizona Coyotes pick Jan Jenik (No. 7), a 19-year-old Czech winger who has 22 goals and 56 points in 27 games for the OHL’s Hamilton Bulldogs but suffered a significant knee injury at the World Juniors that will keep him out indefinitely; Anaheim Ducks Trevor Zegras (No. 8), an 18-year-old Boston University forward who led the World Juniors with nine assists in five games for Team USA; Buffalo Sabres prospect Dylan Cozens (No. 9), an 18-year-old centre who returns to the WHL’s Lethbridge Hurricanes after helping Team Canada to gold at the World Juniors; and Canadiens pick Cole Caufield (No. 10), a 19-year-old American right wing who has 12 goals in 18 games for the University of Wisconsin this season.

Caufield is one of the leading goal scorers in the NCAA as a freshman. The World Juniors poses different challenges for players, and it was no different for Caufield, who finished with just one goal and one assist in five games.

The encouraging sign was that he looked more dangerous with each passing game at the tournament, displaying the mind of a goal scorer and working to generate opportunities. While the numbers weren’t up to expectations, his process was solid. The experience will be beneficial to his overall development.

On the team side, the Ottawa Senators lead the way with five players in the top 50 – Belleville Senators defenceman Erik Brannstrom (No. 24), Ives Tampere blueliner Lassi Thomson (No. 32), University of North Dakota defenceman Jacob Bernard-Docker (No. 42), Belleville centre Josh Norris (No. 44) and North Dakota forward Shane Pinto (No. 50).

The Maple Leafs (Sandin and No. 17 Nick Robertson) and Canadiens (Romanov and Caufield) had two players each, while the Winnipeg Jets’ lone representative is Lukko defenceman Ville Heinola (No. 21). The Calgary Flames and Edmonton Oilers didn’t have any prospects make the list.

Note: The first column in the table below indicates the prospect’s placement in our 2019 rankings:

Top 5 Prospects from each Canadian Team