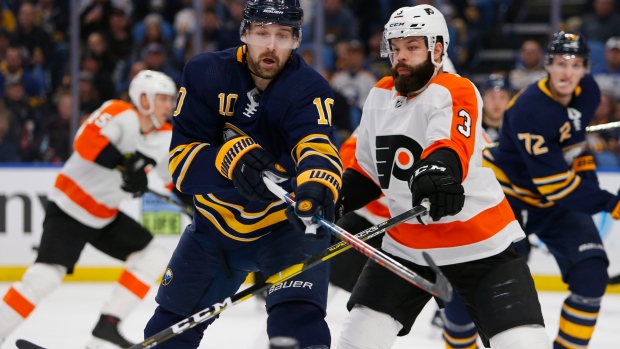 WASHINGTON — The Buffalo Sabres have suspended forward Patrick Berglund indefinitely for failing to report to the team.

"From my knowledge talking to the medical staff, he was ill, so we handled it that way," Housley said. "Obviously it developed into something different, and (general manager Jason Botterill) and the management are handling that."

The 30-year-old Swede has two goals and two assists in 23 games this season. He was a healthy scratch earlier this season and missed five games with an upper-body injury.

Asked about Berglund not being "all in" with the rest of the team, Housley declined comment. The second-year coach preferred to talk about the players still with the Sabres.

"We're going to focus on the guys in that locker room," Housley said. "We do have some depth. ... We feel really good about our club."

An email sent to Berglund's agent, Peter Wallen, was not immediately returned.

Buffalo acquired Berglund from St. Louis in the off-season as part of a four-player trade that sent centre Ryan O'Reilly to the Blues. Berglund, who played the first 10 seasons of his career with St. Louis, has three years remaining on his contract at a salary-cap hit of $3.85 million.

Berglund has 170 goals and 156 assists for 326 points in 717 regular-season games with the Blues and Sabres.