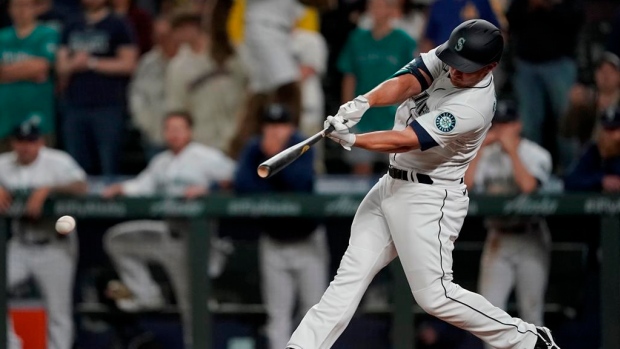 SEATTLE (AP) — Shed Long Jr. hit a tying double in the bottom of the ninth inning and pinch-hitter Kyle Seager singled home the winning run to rally the Seattle Mariners past the Tampa Bay Rays 6-5 on Thursday night.

Seattle lost starter Justin Dunn to a sore right shoulder after two innings, but came from behind with the help of a two-run homer by Ty France and a solo shot from Luis Torrens.

Dylan Moore drew a four-pitch walk from reliever Pete Fairbanks (1-2) to start the ninth. Jake Bauers singled and Long tied it 5-all with his double. Seager batted for Taylor Trammell and singled through the right side of a drawn-in infield to score Bauers.

Hector Santiago (1-1) struck out three in a hitless inning for the win.

Seattle has won four of five. The Rays are 24-8 in their last 32 games, with the eight losses coming by a total of 12 runs.

Randy Arozarena hit his 10th home run off Mariners reliever JT Chargois after Ji-Man Choi’s leadoff single in the fourth. Brett Phillips drew a walk, stole second and scored on Brandon Lowe’s single to make it 3-1 in the fifth.

Joey Wendle and Kevin Kiermaier added RBI singles in the sixth to help build a 5-2 lead.

Rays: RHP Tyler Glasnow (right elbow strain) has been moved to the 60-day injured list and left the team following Wednesday’s game at the Chicago White Sox to see a specialist in Dallas on Friday. Glasnow blamed the injury on the coming crackdown on illegal foreign substances, forcing him to grip the ball differently than he normally would.

Rays: RHP Michael Wacha (1-1, 4.54 ERA) has not pitched more than three innings since returning from the injured list on May 23.