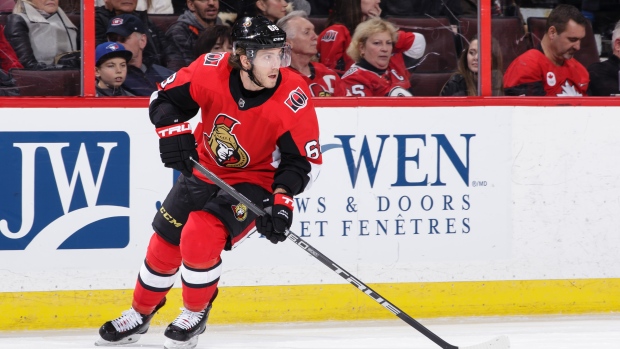 Hoffman had 22 goals and 34 assists last season for the Sens, his seventh year with the club. It was his lowest point total since 2014-15, when he recorded 27 goals and 21 helpers.

Going into last season, the fifth-round draft pick from 2009 (No. 130 overall) had more than 25 goals in the past three seasons.

Part of the drop-off in the left winger’s scoring was due to a dip in his shooting percentage. The 28-year-old shot just 8.6 per cent last year after coming off three straight seasons of at least 11.6 per cent.

Hoffman and his fiancee Monika Caryk have recently been mired by allegations that they had been cyberbullying Melinda Karlsson, the wife of Senators captain Erik Karlsson.

The couple has denied the allegations and told Postmedia Ottawa on June 15 that they feel for the Karlssons and want to help them find the person responsible.

Caryk said she has hired a lawyer to work with the Karlssons and the Senators to conduct a third-party investigation, adding the couple has nothing to hide.

In an application for a peace bond filed May 4 in an Ottawa court, Melinda Karlsson alleged that Caryk posted hundreds of derogatory online messages aimed at her and her husband.

The Karlssons were subjected to trolling posts on Erik's Instagram account after their first child was stillborn in March.

Hoffman said he reached out to Erik Karlsson to try to resolve the situation, but didn't hear anything back.

Hoffman, a native of Kitchener, Ont., still has two seasons left on a four-year, $20.75 million deal he signed with Ottawa ahead of the 2016-17 season that carries an AAV of approximately $5.2 million per year.