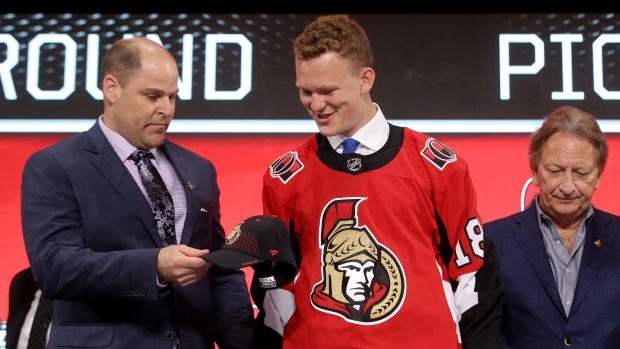 Ottawa Senators prospect Brady Tkachuk will decide by August 12 whether he will return to Boston University for his sophomore season, or turn pro and sign his entry-level contract.

Tkachuk gave the update Sunday while skating with Team USA at the World Junior Summer Showcase in Kamloops, B.C.

"The decision will be based on what's best for my development short- and long-term; I want to have a long career and don't want to go somewhere and not have an impact," Tkachuk told NHL.com. "I want to make an impact wherever I go and be able to contribute and play my best. Having both options is a great problem to have; they are two great spots."

Tkachuk, who was selected fourth overall in June, had eight goals and 31 points in 40 games with Boston University last season. He added three goals and nine points in seven games at the world juniors.

Button: Brady Tkachuk is not ready for the NHL

TSN Draft expert Craig Button on the surprises at the NHL Draft, Senators drafting Brady Tkachuk and needing more time to develop, the Senators other draft picks and the Flames are making some big mistakes.

Tkachuk's brother Matthew spent his first season in the NHL right after being drafted sixth overall by the Calgary Flames in 2016, appearing in 76 games. He played with the OHL's London Knights before being drafted and was free to sign at any time and still return to the junior level. If Brady signs, he will not be eligible to return to college.

Tkachuk said he would discuss the decision with his family after this week's summer showcase before announcing his intention.

"Each party deserves to have the time to adjust to whatever decision is made and my goal has never been to make this a last-second decision," Tkachuk explained. "It's tough for me to be on the phone with my parents because we're not in the same city, but I want to talk to them face-to-face because their opinion, and the opinion of my brother and sister, are important so they'll tell me what they think but it'll be my decision in the end."

Tkachuk said after being drafted he believes he'll be able to compete at the NHL level this season, but said Sunday the decision remains difficult.

"It's one of the biggest decisions of my life," he said. "It's tough and stressful but when it happens it'll be nice to have it off the shoulders. I just want to be 100 per cent committed to wherever I decide."