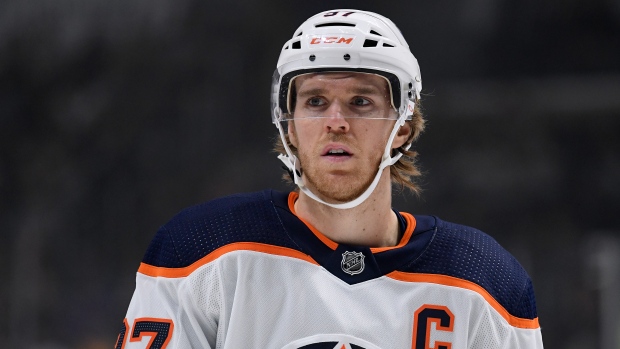 The Edmonton superstar centre was ranked No. 1 on 20 of 26 ballots in the annual TSN Top 50 Players Poll.

It marks the fourth straight year McDavid has finished first overall – confirming his standing as the NHL’s most dynamic player.

McDavid is arguably the greatest blend of speed, skill and (hockey) sense in hockey history.

He leads the league in points and points per game since 2016-17 and had nine points in four playoff games last season before his Oilers were upset by Chicago in the play-in round.

The only person in the same TSN balloting hemisphere as McDavid was Colorado centre Nathan MacKinnon, who collected five first-place and 19 second-place votes in a Mc-Mac, one-two finish.

Edmonton centre Leon Draisaitl is third on the list after finishing No. 1 in NHL scoring as well as voting for the Hart Trophy, Ted Lindsay Award and Germany’s Sportsman of the Year award.

Draisaitl was the only other player to receive a vote for No. 1.

Last year’s No. 3-ranked player, Tampa Bay right winger Nikita Kucherov, is not included on the 2020-21 list because he is projected to miss the regular season with a hip injury.

Rounding out this year’s top group are No. 4 Toronto centre Auston Matthews, who was on pace for his first 50-goal season before the 2019-20 regular season was suspended, and No. 5 Victor Hedman, the Tampa Bay defenceman who won the 2020 Stanley Cup and Conn Smythe Trophy as playoff MVP.

Sidney Crosby, who ranked No. 1 the first seven years of the poll and second the next three, ranked No. 7, his lowest finish in the 11-year history of the poll.

Winnipeg goalie Connor Hellebuyck returns to the Top 50 after a one-year absence, ranking as the top goalie at No. 15.

Among the first-time 50s are Colorado defencemen Cale Makar (No. 22) and Vancouver blueliner Quinn Hughes (No. 32), who were first and second, respectively, in Calder Trophy voting last season.

The list of ex-men, those who dropped off the list this season, is particularly distinguished –beginning with Los Angeles defenceman Drew Doughty, who ranked as high as No. 5 during a 10-year run on the Top 50 list.

Check out the full list of the Top 50 players for 2020-21 below, along with the listing of their 2019-20 rankings. Also included are statistics including games played, goals, assists, points, goals-against average, save percentage and shutouts.