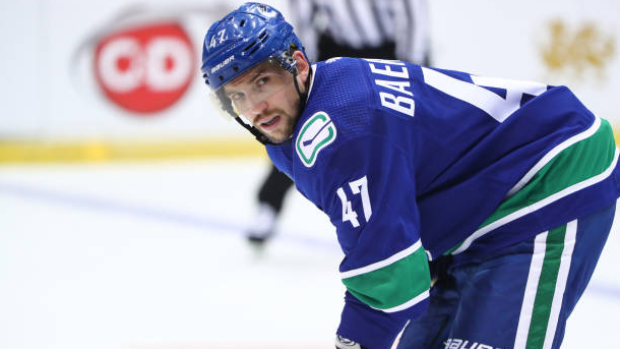 With the remainder of the AHL season cancelled, Sven Baertschi is ready to turn his focus to his next team, though he notes his future remains in the hands of the Vancouver Canucks.

Baertschi was assigned to the AHL's Utica Comets out of training camp this season, but re-joined the Canucks for a six-game stretch before being waived in December. Canucks general manager Jim Benning said at the time that the Canucks had been attempting to trade the 27-year-old and Baertschi said Tuesday he hopes the team will be more successful in the off-season.

“I don’t want to be back in the minors,” he told TSN Radio 1040 Vancouver's Jeff Paterson. “That’s where I’ve set my goal at. It’s up to them really what they’re going to do next. That’s their job and that’s what they do.

"I’m just going to work my ass off going forward, making sure I’m ready to go to whatever camp I’m going to. I have no plans of going back to Switzerland or to Europe; I think personally I can play on any team in the National Hockey League. I can do it. I can just focus on myself and making sure I’m ready for another year. I think I’ve proved to everybody that was worried before. I’m 100 per cent healthy, my game is going well and I’m preparing for whatever is next.”

Signed through next season with a $3.37 million cap hit, Baertschi posted two assists in his six games with the Canucks this season. He had 13 goals and 46 points in 43 games with the Comets.

Limited to just 26 games last season due to a concussion, Baertschi said he believes the Canucks did not have him in their plans for this year when he arrived for training camp.

“I don’t think Vancouver expected me to come back and play," Baertschi explained. "That’s my personal opinion. Certain things sink in after a year.

"There were some moments in the AHL when I thought there are some darn good players - like really, really skilled players. Sometimes I looked at it as the best players aren’t always in the NHL. There are definitely some players in the AHL that don’t belong there. For me, it was more confirmation that I don’t belong there in many ways. I don’t want to be rude or look down on people, but the way I look at the game is a lot different than a lot of other guys. As soon as I was put on waivers and sent down, for me personally it was about confirming to myself that I was 100 per cent healthy.”

” It’s part of the business,” he added. “They built their team over the summer and that’s what they were going to go with. I went into camp and performed well and did what I could. And I still ended up in Utica. I made the best of that and now I feel better about my game than ever before. When a team puts you on waivers, it’s got a different feel to it. They’re paying you all this money to go play in the minors. It’s got a different feel to it. We’ll see what the future holds, but I’ll always be grateful for my time there. The teammates, the fans, the city. I’m always going to remember Vancouver as a wonderful spot to play in and I enjoyed every single minute of it.”

Baertschi was selected by the Calgary Flames 13th overall in the 2011 NHL Draft and made his debut in the 2011-12 season.  He was acquired by the Canucks in a March 2015 trade for a second-round pick.