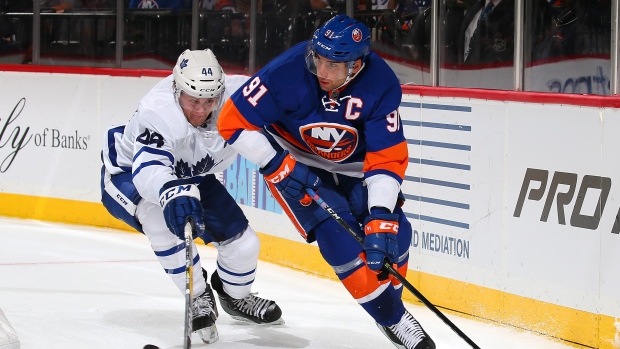 John Tavares will meet with six teams in Los Angeles this week as he gets closer to hitting the open market on July 1.

According to TSN Hockey Insiders Pierre LeBrun and Darren Dreger, Tavares will meet with the Dallas Stars, Boston Bruins, San Jose Sharks, Toronto Maple Leafs and Tampa Bay Lightning. LeBrun adds that Tavares will also speak to an additional two or three teams over the phone, who could then earn an in-person meeting.

He will also, of course, continue to meet in-person with the New York Islanders as they try to re-sign the star centre.

Dreger notes that all the meetings will take place between Monday and Wednesday.

The 27-year-old is coming off a season in which he posted 37 goals – one off his career-high of 38 in 2014-15 – and 47 assists for 84 points in a full season of action. It marks the third time in the last four seasons where Tavares has posted at least 30 goals. He closed the season on a high note, scoring an overtime winner against the Detroit Red Wings to give the New York Islanders a 4-3 victory.

During Tavares’ tenure, the Islanders have made the postseason three times in nine seasons.

Tavares was drafted first overall by the Isles in 2009, one pick ahead of Tampa Bay Lightning defenceman Victor Hedman.