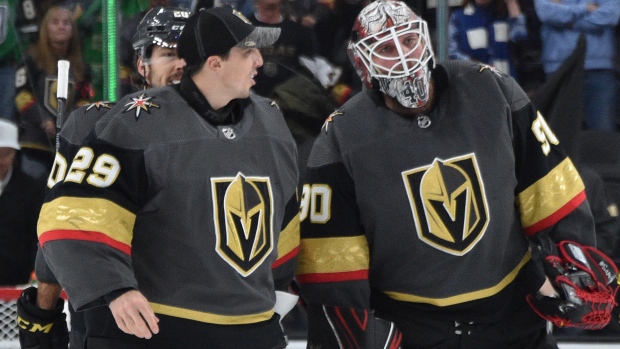 It is more than fair to say that the NHL’s final four – the Tampa Bay Lightning and New York Islanders in the East, and the Dallas Stars and Vegas Golden Knights in the West – is a deserving group.

The Lightning and Golden Knights were prohibitive Stanley Cup favourites, the Stars have been fantastic all season long, and it’s hard to think of another team that’s been as defensively impressive as the Islanders have been in this postseason (save for Monday’s 8-2 loss).

All have been great thanks to distinct strengths. Tampa Bay carries a high-octane offence with shooters all over the ice, prone to the occasional defensive lapse. Their third-round opponent is the polar opposite – an elite defensive team that, when they have looked bad, struggle to generate meaningful offence for long stretches of the game. In the West, Vegas remains a puck possession dynamo, but are now searching for scoring. Dallas may be the most balanced team of the four – we watched them struggle to score all season long, only for them to put together a white-hot shooting run to knock out the Avalanche.

There is one element that I think is being overlooked in this final four, and that’s in the goaltending department.

Years ago, we grew accustomed to defining starting and backup goaltenders, and then expected the starter to play the lion’s share of the minutes and own the crease in the postseason. But those workhorse goaltenders hardly exist anymore – European imports have added to the talent pool, giving organizations more options. Add the fact that teams are increasingly aware of how overworked goaltenders are vulnerable to performance degradation and injury, and you have the modern era of goaltending.

In that way, Tampa Bay is an outlier – Andrei Vasilevskiy has been Jon Cooper’s choice in every playoff game, which is more exception than the norm these days. Out on Long Island, Barry Trotz has utilized both Semyon Varlamov and Thomas Greiss in high-leverage spots. In Dallas, Rick Bowness has had to manage with a struggling and injured Ben Bishop, paving the way for Anton Khudobin’s added ice time. In Vegas, Peter DeBoer hasn’t made it a secret that the newly acquired Robin Lehner is the team’s starting goalie, pushing Marc-Andre Fleury into a backup role.

This has been a common theme this postseason. Even if we ignore the play-in round (a frenetic five-game stretch littered with back-to-backs), teams are using more goalies this postseason than ever before – at least in the modern era of hockey.

Two criteria here: we will omit teams losing in the play-in round, and only accept a goaltender as a ‘player’ if he faced at least 30 shot attempts over the course of the playoffs. 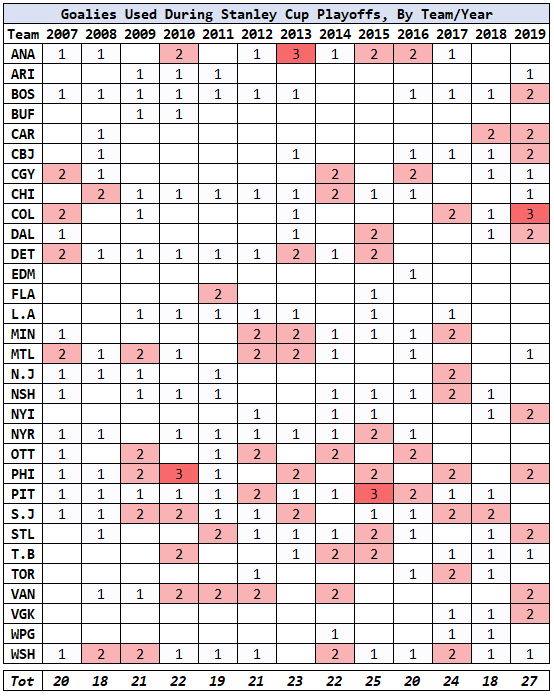 It’s important to look back at where we were, say, 10 years ago for a frame of reference. The 2008-09 season saw 16 teams enter the Stanley Cup Playoffs and all but two (Chicago rotated Cristobal Huet and Nikolai Khabibulin; Washington used Jose Theodore and Semyon Varlamov) utilized a workhorse goaltender.

Fast forward 12 years later, and that is simply no longer the case: 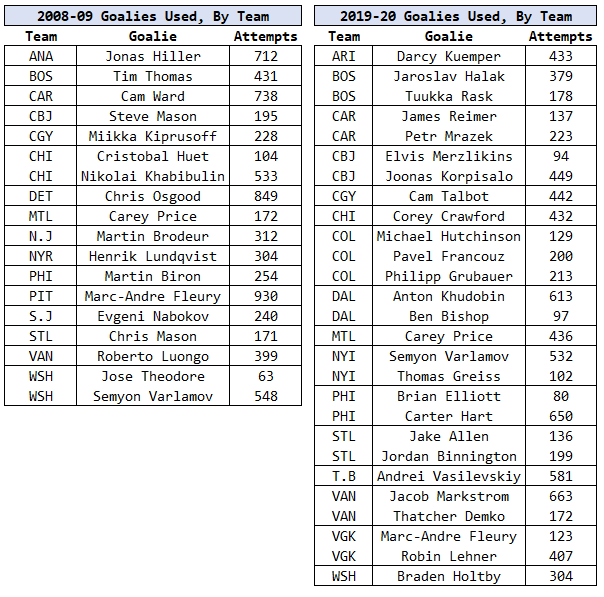 There are any number of explanatory variables beyond an increase in available goaltending talent and a better understanding of the benefits of rest.

As one obvious example, these Stanley Cup Playoffs have been an animal unlike any other – a highly compressed schedule due to the ongoing pandemic, a five-month layoff that surely had an adverse impact on player readiness, a number of teams experiencing goaltender injuries, and so on.

But to merely chalk it up as a one-off would be to miss what’s been a longer-term trend, save for a curiously low rate observed in 2018-19.

A three-year moving average would show that the number of playoff goaltenders used since the 2007-08 season would have jumped from 19.7 to 23.0. That data follows a similar shift experienced during regular season play. And this postseason isn’t complete – we could see the number grow further if, for any reason, an entrenched starter like Vasilevskiy can’t go.

There are also qualitative arguments to be made here. Yes, the data is more noisy this season than others. But can you remember a season where a team would have – by design – started their backup goaltender in Game 1 of the Western Conference final, like Vegas did on Sunday night? How about starting the backup in an elimination game, like the New York Islanders did last week? And then there was Vancouver losing their Vezina-calibre goaltender to an injury in a series where they were completely overmatched, only to turn to backup Thatcher Demko, who seamlessly put together the performance of a lifetime.

The reason coaches can exercise that option is because they no longer look down the bench to find a journeyman netminder who is going to stop 87 per cent of shots. Organizations have collectively hunted for backups who are more capable, even if they have an entrenched starter. They are also more amenable to rotating a tandem of goaltenders all season, and are much more willing to use back-to-backs and three-in-four situations to give rest to starters.

This has quietly created a reshuffling of the allocation of salary cap money around the league, and I anticipate that continuing over the next few years.

One thing is for sure: I am not alone in that sentiment. Take a look at TSN’s Trade Bait List, where three of the top 20 players are very capable goaltenders, with a fourth already traded. The goalie carousel will surely continue to spin this summer and beyond.