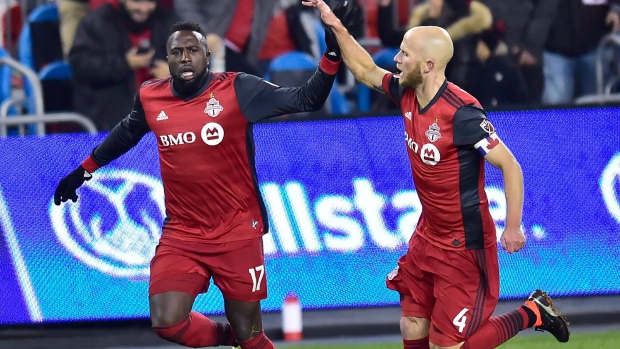 TORONTO — It speaks volumes about where Toronto FC is at these days that the reigning MLS champions are looking forward to tackling Mexican heavyweight Tigres UANL on the road next week.

The fact that Toronto will arrive at Tigres' 42,000-capacity Estadio Universitario next Tuesday with an edge after Wednesday's 2-1 win at BMO Field helps. And while Mexico has been a graveyard for MLS teams over the years, TFC believes it has the goods to finish off the Liga MX champion and advance to the Scotiabank CONCACAF Champions League semifinal.

"We're confident," said Toronto midfielder Jonathan Osorio, whose 89th-minute highlight-reel goal decided the first leg of the two-game aggregate series. "Our objective was to leave here with a lead ... We're excited. We're excited to go there and protect that lead."

For the 25,587 at BMO Field, the star-studded contest did not disappoint. An enthralling clash of champions built from a slow burn in the first half to all action in the second with a sting in the game's tail courtesy of an audacious Osorio backheel.

Toronto will head south full of confidence, full value for the win after outshooting its Mexican opposition 12-3 (4-1 in shots on goal) in the second half when all three goals were scored. Tigres, meanwhile, will hope its away goal will play its part in the rematch.

"It's halftime," said striker Jozy Altidore, who pulled Toronto even at 1-1 in the 60th minute . "It will be tough. Obviously they got that away goal which makes thing tricky. But I think we're a team capable of scoring goals. Just as much as they are."

"I don't think any of us in the locker-room consider it a win just yet. I think we've given ourselves a little bit of an advantage as we go there. We know today was at a certain level of intensity and we know when we go there it will be a whole different level when we get down to Mexico.

"We're playing the Mexican champions who don't want to lose this series in front of their home crowd and their home stadium. .. It sets up as a really interesting return leg back to Mexico."

Both teams will look forward to a better surface than the uneven early March grass at BMO Field. And some warmer weather.

It was two degrees Celsius at kickoff but fans were bundled up. Vanney skipped a coat, however, wearing a suit bolstered by a quilted waistcoat.

The forecast for the evening rematch calls for 13 Celsius, cool by Monterrey standards.

Osorio's goal came after some extended Toronto pressure with Sebastian Giovinco finding the Canadian in front of goal. The ball was slightly behind him so Osorio pivoted like a ballet dancer and backheeled it home.

Osorio, who called the goal the most important of his career, said his instincts took over as he realized the ball was behind him.

Osorio, who has 13 goals in 142 regular-season MLS starts, had missed a glorious opportunity after Tigres went ahead when he skied his shot from point-blank range from a low Altidore cross.

A key stoppage-time tackle by Chris Mavinga preserved the tie.

Toronto had looked good to open the second half but Chilean international Eduardo Vargas turned the tide, outmuscling Mavinga before slamming a difficult right-footed shot past Alex Bono in the 52nd minute.

Altidore could have made it 2-1 in the 70th minute but the burly American could not control a wonderful pass from captain Michael Bradley that found him in front of goal. Defender Drew Moor then came close with a header off a Bradley free kick.

And Tigres seemed to escape a late handball in its penalty box.

Commissioner Don Garber has called the CONCACAF club championship a "referendum" for MLS in its bid to become the dominant circuit in North America.

Mexican teams have won the last nine editions of the tournament since it changed to a Champions League format in 2008-09. Mexican squads were runners-up in seven of those finals with Real Salt Lake (2010-11) and the Montreal Impact (2014-15) also making the final.

In quarterfinal action Tuesday, the New York Red Bulls won 2-0 at Club Tijuana — just the third victory in 49 competitive matches (3-38-8) on Mexican soil for MLS teams. The other two wins — FC Dallas over Pumas and Seattle over Monterrey, both by 1-0 margins — came in 2011 Champions League group play.

MLS teams were 0-26-5 in CONCACAF League/Cup knockout games in Mexico before the Red Bulls' win.

How deep are the Mexican champions? They could bring star French forward Andre-Pierre Gignac off the bench to start the second half. The former Toulouse and Marseille player, part of France's Euro 2016 runner-up squad, has seven goals so far this season in Mexican league play.

Spanish playmaker Victor Vazquez, forced to leave TFC's season-opening loss to Columbus on the weekend with a nerve issue in his back, came on in the 79th minute.

Both teams came out in 3-5-2 formations, dropping to a five-man backline when the other team had the ball.

Tigres came as advertised, full of skill and pinging accurate passes around the field. Toronto looked to counter-attack, gradually building into the game as the first half wore on with Giovinco pulling the strings.

The Toronto-Tigres series winner will face either Mexico's Club America or Panama's Tauro FC next. The tournament champion qualifies for the annual FIFA Club World Cup.

Going into the game, Toronto's record against Mexican teams in the competition was 1-4-3. The lone previous victory was a 2-1 decision over visiting Cruz Azul in August 2010.

Toronto's best Champions League showing was in 2010-11 when it reached the semifinals before losing 7-3 on aggregate to Mexico's Santos Laguna.