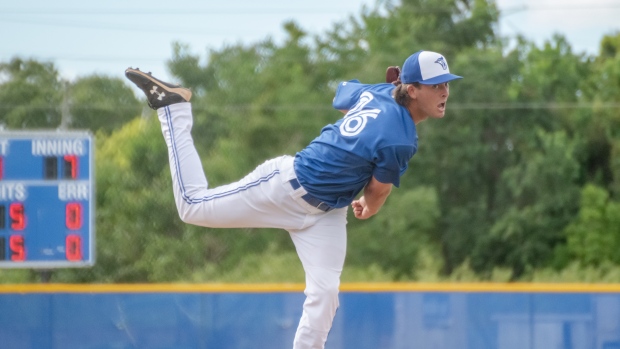 SCOTTSDALE, Ariz. — When an ERA has a zero in front of the decimal, there’s bound to be attention, no matter the prospect pedigree.

There’s also bound to be questions — all of them fair — of whether it’s sustainable.

Jackson Rees was asking that, too. About himself.

The 2019 season was a breakout campaign for the 25-year-old Toronto Blue Jays prospect, but even has he was missing barrel after barrel and inducing grounder after grounder, the Aliso Viejo, Calif., native was wondering how long his run of success was going to last.

It’s baseball, after all. There’s always a bump in the road. Usually many.

“I was definitely thinking, ‘When is this going to end?’ Rees said with a smile as he stood inside the clubhouse at Salt River Fields, where he’s one of eight Jays prospects suiting up for the Scottsdale Scorpions in the Arizona Fall League this month. “I definitely thought there was going to be some point where people were going to catch on.

“It was surprising. I would go through a couple outings early in the season with success and I was like, ‘What is going on?’ No one could hit my pitches very hard and, I think, I went a couple weeks without (a ball in the air). It was just ground balls or strike outs or ground-ball hits.”

Hitters never did catch on.

Even after being promoted from Low-A Lansing with a sparkling 0.36 ERA in 25.1 innings, the right-hander was still getting outs and coming out of innings clean at High-A Dunedin, finishing with the same zero in front of the decimal place that every pitcher starts the year with at a tidy 0.73 in 61.2 frames, overall.

Add in an extreme ground-ball rate at over 60 per cent and the numbers jump off the page.

So how did Rees go from undrafted afterthought out of the University of Hawaii to a reliever with an ERA well under 1.00 in his first full professional season and ending up in the AFL with some of the best prospects of the game?

It’s a great question. Rees doesn’t really have an answer.

Good fortune will always have a place with any ERA that low, but there are other factors at work.

“There were slight mechanical changes I made just to be more direct to the plate,” said Rees, who hasn't allowed a run in five appearances in the AFL, striking out 10 across 6.1 innings. “I knew I had funkiness, I knew I had movement. Now, it was just about throwing it for strikes. Since I did that, it’s just been pretty effective.”

Cullen Large, who’s one of three position players suiting up for the Scorpions alongside Rees in the AFL as the Blue Jays hope to build his infield versatility at second base and third base, quickly realized why the righty was having so much success when they were together at High-A Dunedin for part of the season.

“When he got called up to High-A, I was still down there and he came out of the bullpen to throw his first warmup pitch on the field and I had heard a bunch about him — obviously, he didn’t give up any runs in Lansing — so I was like, ‘All right, this guy’s gotta be good, let’s see what he’s throwing,’ ” Large, a fifth-round pick from the 2017 draft, recalled. “I stood behind the mound and I wanted to see what his ball was doing. He threw the first pitch and it was hard and it probably moved like a foot and I was audibly like, ‘Oh, my gosh.’

“I faced him when we got here for like five pitches in kind of a live AB situation and, I mean, sometimes he doesn’t even know what his ball’s doing. He just throws it and lets it dance.”

The command and action weren’t exactly the same during his two healthy seasons at Hawaii.

Rees had to take two medical redshirt years. One due to a shoulder impingement, and one thanks to a stress fracture in his lower-back.

He wasn’t even a prospect.

Disappointingly, his name wasn’t called in the 2018 MLB Draft.

“Super motivating,” Rees said. “It hurt. It definitely hurt. I think I got 15 questionnaires (from MLB teams during the draft process), which may not be a lot but it felt like a lot for me. I was like, ‘OK, at least someone might pull the trigger and give me a shot.’ Then all 40 rounds go by and I’m sitting there going, ‘What do I do now?’ ”

Thanks to the medical redshirts, Rees had an extra year of NCAA eligibility, so he was debating going back to Hawaii in hopes of hearing his name called in 2019, or he could graduate transfer and start work on his masters.

A call from Blue Jays’ California area scout Jim Lentine shortly after the draft changed all that.

“Jim Lentine called me and said, ‘Hey, we’ll give you a thousand bucks and a free-agent sign,’ and I said, ‘Yes, I’m all game for it,’ ” Rees said. “It was hectic and it was a low, for sure, in my baseball career but I’m glad it can lead to this high.”

Oddly, last off-season, Rees was building up for a starter’s workload and was set to be a part of the Low-A Lansing rotation to open the season.

The Kevin Pillar trade on April 2 changed all that.

One of the three pieces coming back in exchange for the veteran outfielder was right-hander Juan De Paula, who was assigned to the Lugnuts’ rotation, leaving Rees bullpen-bound.

After all the success in the ’pen, the Jays haven’t communicated anything to Rees about a potential move back to the rotation, but he’s been working adding a changeup and curveball to his repertoire.

“Hopefully, I’ll be a four-pitch-mix guy,” Rees said. “If I stay in the bullpen, then I’ve got those tools to my advantage and I’ll be able to hone those in over the off-season and come back with four pitches — and four good pitches.”

Like any pitcher, the rotation is usually where they want to be, but the undrafted Rees doesn’t care.

“I’m in the position where I just say yes,” Rees said. “You want me in the bullpen? Yes. You want me as a starter? Yes. I’ve done both now and I’ve, obviously, had more success in the bullpen but I’ve always liked starting, it’s a nice feeling going out and giving your team a good effort and putting them in position to win the game.”

It’s the oldest cliche in the book, but Rees truly is trying to take things day-by-day, inning-by-inning, out-by-out, pitch-by-pitch.

He doesn’t want to start thinking about the step up in competition he’ll face next year in Double-A — a flame-out point for many a prospect before him — or where he could end up if he can have the same type of success for a second season in a row.

It stems from the draft-day snub and where that moment has led.

“I’m always grateful that they gave me a chance.”​