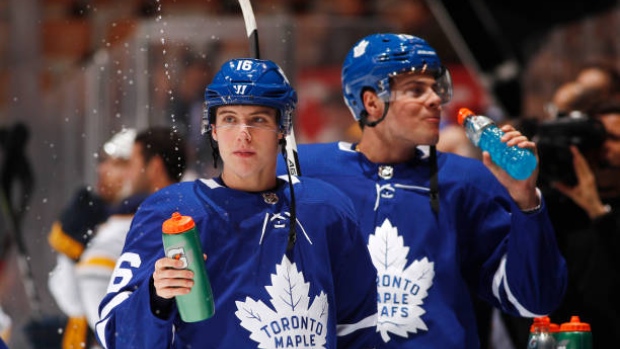 With the Toronto Maple Leafs' early exit from the Stanley Cup playoffs, the focus on the team has shifted to the off-season and what to do with Mitch Marner.

The 21-year-old winger will be a restricted free agent on July 1 and TSN Hockey Insider Darren Dreger says there is already plenty of opinion on how much he could pull in.

"The truth is, there are people around the National Hockey League that are employed by other teams – other executives – that think Marner is worth as much as Auston Matthews," he told TSN Radio 1050's First Up on Friday.

Matthews signed a five-year contract extension in February that carries an average annual value of $11.6 million next season, while teammate John Tavares' $11 million cap hit is also on the books. Chicago's Patrick Kane is currently the NHL's top-paid winger at $10.5 million per season. And all of that factors into the speculation on how the Maple Leafs will manage the salary cap this summer.

Dreger on Marner's next contract, Babcock's future with Maple Leafs and more

"If I'm Darren Ferris [the agent for Mitch Marner], I'm in hiding! The conversation I would have would be short - it would be, 'All right, you guys know what's it is going to take. If you're not going beyond $10.5, don't bother calling. If you're around 11, then give me a call. Otherwise, I'll see you in mid-June.'"

Marner tallied a career-high 26 goals and 94 points in the final year of his entry-level contract, finishing first in team scoring for the second-straight season and 11th in league scoring. In 241 career NHL games, he has 67 goals and 224 points.

Dubas told reporters at the Leafs’ end-of-season media availability on Thursday that it was imperative to get Marner signed before July 1.

"[Marner's contract] is priority one for us," he explained. "I’ll call [Darren Ferris] in the coming day or so and begin to see where he’s at and how he’d like to proceed and how Mitch and his family would like to proceed.

"Mitch has had an excellent season; he’s a massive, massive part of everything we’re doing here. Without an answer on Mitch, we’re going to be in a stalemate. It is a top priority because we’re not going to jump around and chew up our cap space we are going to need for Mitch with fringe signings either. It’s important. We just have to get right on it and get it done."