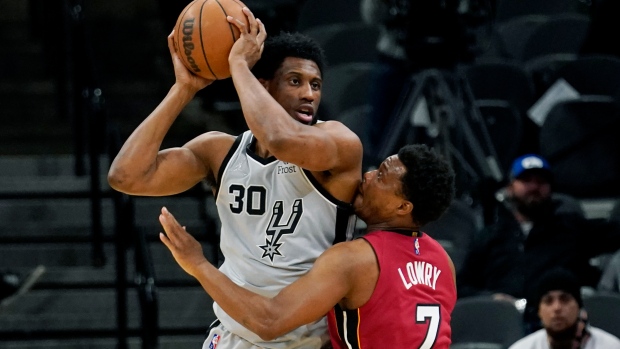 TORONTO – One of the best games of Thaddeus Young’s 15-year career came in the arena he now calls home, and the newly acquired Raptors forward has no recollection of it.

The Philadelphia 76ers were visiting Scotiabank Arena, formerly known as the Air Canada Centre, on March 7, 2010. Young, who was 21 and in his third NBA season at the time, had been coming off the bench but got a spot start when the regular starter, Samuel Dalembert, showed up late for a team meeting.

The Georgia Tech product and former 12th-overall pick ended up playing 43 minutes that night. He hit 13 of his 18 shots, scored 32 points – which remains his career high more than a decade later – and led his team to a 114-101 road win over Toronto.

“Oh that’s crazy,” Young said, reminded of that contest. “I did not know that.”

It’s a bit unusual for a player to forget his highest-scoring game; most remember it down to the smallest and most insignificant detail. In fairness to Young, though, it’s been a while – for perspective, Chris Bosh was still a Raptor in 2009-10 and DeMar DeRozan was in his rookie season – and he’s played a lot of games. Besides, those types of things aren’t exactly top of mind for the veteran.

With that approach, it shouldn’t take long for him to fit right in. Young arrived in Toronto on Friday afternoon, less than 24 hours after the deadline-day deal that sent him from San Antonio to the Raptors, along with a second-round pick, in exchange for Goran Dragic’s expiring contract and a lottery protected first-rounder.

He was in Atlanta with his former club when Spurs head coach Gregg Popovich called him to break the news a couple hours ahead of Thursday’s 3 p.m. trade deadline. Switching teams and moving cities – and in this case, countries – in the middle of the season is never easy, but he welcomed the change. It’s been a challenging few months for the 33-year-old.

Young was coming off an excellent season in Chicago, where he thrived in his role as a do-it-all reserve and veteran leader for one of the league’s most promising young teams, when he was sent to San Antonio in the DeRozan sign and trade this past summer.

For both player and team, it never felt like a fit. In the early stages of their rebuild, Pop and the Spurs had prioritized developing the younger players at his position, and by December, Young had fallen out of the rotation altogether. A year removed from averaging 12.1 points, 6.2 rebounds and a personal-best 4.3 assists on 56 per cent shooting with the Bulls, he only appeared in 26 games as a Spur this season, including just four of the last 28 contests.

“This was the first time in my career that I wasn't really playing as much,” Young said, speaking to the Toronto media for the first time just before the Raptors took on Denver at home Saturday evening. “So I had to figure out how to continue to stay in shape and how to continue to do certain things and fight through adversity. I think it made me a stronger player and a stronger person, but it also taught me a lot about what I can survive through during those tough times.”

So, over these past few months, Young worked and trained like it was his off-season. He would show up early to practice or shoot around, and then stay late. He would come in on off days and scrimmage with the assistant coaches and video coordinators. All the while, he waited for his next opportunity, an opportunity like the one that just presented itself. When he found out where he was headed, he got excited.

“I’ve been a guy throughout the course of my career who has played with a lot of energy, a lot of passion, and [this Raptors team is] doing the same thing,” he said. “When I looked at how the roster was constructed I was like, man, they got a lot of long and athletic guys; I’m with this.”

The fit should be seamless, both on and off the court, which is why the Raptors have been chasing him for years, as president Masai Ujiri and general manager Bobby Webster both alluded to this week. When they were looking to turn the expiring contract of Dragic – who had been away from the team since taking a personal leave in late November – into a viable rotation player at the deadline, Young was near the top of their wish list. A couple other options had fallen through earlier in the day, but let’s put it this way: if landing Young wasn’t a priority they would’ve waited to see what was out there closer to the deadline instead of pulling the trigger on this deal before noon.

He checks off a lot of their boxes. Young is 6-foot-8 with a 7-foot wingspan, so he fits the mould in that regard. He’s a versatile, defensive-minded player that can also make plays. He’s also a culture fit, with his work ethic and commitment to winning.

“I don’t mind guarding anybody on the court,” Young said. “I’ve been versatile my whole career, being able to guard a lot of different guys, and I think that’s one of the reasons why I’ve been able to stick around, for my capabilities on the defensive end.”

“Having so many similar guys, we can all switch and create havoc because we’re all super long and athletic. So, I’m very interested to see how it goes and I’m very, very happy to be here.”

It will take some time to learn each other. Young wants to take this first week or so to survey his new surroundings and evaluate his new teammates to determine how and where his leadership is needed, without stepping on any toes.

After undergoing his physical, he went through an individual workout and met some members of the organization at the team’s practice facility on Thursday. He didn’t meet most of his teammates until just before Friday’s game and still hasn’t gone through a full practice. Nick Nurse has been impressed with how quickly Young’s picked things up, which isn’t surprising given his experience. Even though he was available to play on Saturday, he didn’t end up getting into the game, a competitive 110-109 loss to the Nuggets.

Young could make his Raptors debut in New Orleans on Monday or in Minnesota on Wednesday, or maybe it doesn’t happen until after next week’s all-star break. As it stands, Nurse has the luxury of easing him in.

He has good reason to be happy with the nine-man rotation that he’s settled on recently. Although they’ve leaned heavily on the starters, who continue to log big minutes, Chris Boucher, Precious Achiuwa and Dalano Banton have given them good minutes off the bench, while Khem Birch has functioned as the ninth man since returning from injury, and he played well against Denver.

They didn’t bring Young in to supplant any of those guys. They brought him in to complement that group, which had won eight straight games before Thursday’s loss, and to serve as insurance over the final third of the season. As long as this team is rolling, it might take an injury for him to get his opportunity. But he’s ready to prove that he can still contribute, and that’s another reason why the Raptors targeted him: he doesn’t need to play major minutes to make an impact.

“I think he could be a great piece for our locker room, especially with a lot of young guys,” Fred VanVleet said. “I think he can offer some insight and experience and advice. I think he’ll be a good fit on the court when he gets out there. He’s one guy you probably don’t have to worry about once he gets acclimated to what we do.”

At 33, Young is oldest player on the team; nobody else is even in their 30s. He’s played in 1059 career regular season games, nearly three times as many as anybody else on the roster. For an inexperienced club that has aspirations of making a run and getting its young players some valuable playoff reps, his mentorship and steadying presence should come in handy.

We don’t know what his role will look like. We don’t know what his future holds – he’s an unrestricted free agent after this season, though the Raptors own his Bird Rights and can keep him around for another year or two, if this two or three-month audition goes well. But regardless of how much he plays or how long he’s here, you know what to expect from Young. He’s got his priorities straight.