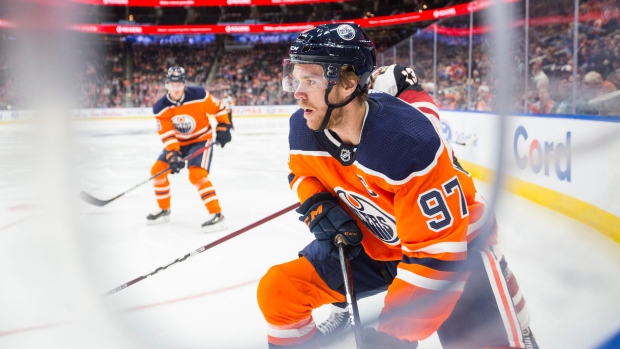 EDMONTON — Connor McDavid's return to actual game play from a knee injury may not have been a triumphant one, but at least it was a return in the first place.

McDavid was held off the scoreboard in a 4-2 pre-season loss by the Edmonton Oilers to the Arizona Coyotes on Tuesday, but he considers his first foray back onto the ice with real competition to have been a mildly successful one overall.

"I felt a little rusty, but that's to be expected in the first pre-season game. It was nice to be out there, for sure," said McDavid. "I was able to push myself like nothing happened, so I was happy about that. Obviously, a game is a lot different than a practice, so it was good to get in one."

The Oilers captain was initially uncertain if he would play in any pre-season games, with even the start of the season in doubt. He tore the PCL in his left knee in Edmonton's season finale against Calgary on April 6 after a collision with Flames defenceman Mark Giordano sent him hard into the net.

"He needed to get into a game just to get his mind right," said Oilers head coach Dave Tippett. "Worked hard. Not much happening."

The 23-year-old, who had a career-high 116 points in 78 games last season, is uncertain if he will play again in the pre-season.

"At that point, it's up to the coach and who he wants to see," McDavid said. "Obviously I'd like to keep playing, but it's ultimately up to him and the line-up he wants to see."

Adin Hill made 39 saves and Lawson Crouse, Michael Bunting, Michael Grabner and Derek Stepan scored for the Coyotes, who improved to 3-2-0 in exhibition action.

"The biggest thing I've been working on is narrowing my stance a little," Hill said. "I feel like I'm more reactive and quicker out of that. I'm just focusing on that every shot in practice and it'll translate into the games."

Ryan Nugent-Hopkins and Riley Sheahan replied for the Oilers (2-3-0).

Crouse opened the scoring for the Coyotes 12 minutes into the first period when he picked off an errant pass and fired a bullet over the left shoulder of Oilers goalie Mike Smith.

Arizona got an easy goal three minutes into the second period when Adam Larsson gave the puck away in front of Edmonton's net to give Bunting an shot and make it 2-0.

Oilers forward Jujhar Khaira picked off a pass just four minutes later and went in on a short-handed two-on-one breakaway, dishing the puck to Nugent-Hopkins, who beat Hill for his third goal of the pre-season.

Mikko Koskinen replaced Smith in the Oilers net for the third period.

The Coyotes restored their two-goal edge midway through the third frame on a quick breakout with Vinnie Hinostroza made a nice feed to Grabner, who chipped it over Koskinen.

Edmonton came right back on an unusual goal as Hill's blocker save on a Josh Archibald shot deflected off the face of Sheahan and into the net.

Arizona went up 4-2 with seven minutes left as a shot deflected off an Oilers defender to a wide-open Stepan, who scored his second in exhibition.

Notes: Both teams have two pre-season games remaining with their next games on Thursday, as the Oilers head to Winnipeg to face the Jets and the Coyotes are in Vancouver to take on the Canucks… Former Coyotes goalie Smith, who signed as a free agent this summer with Edmonton after his latest stint in Calgary, made his debut for the Oilers after missing the front end of camp with an illness.