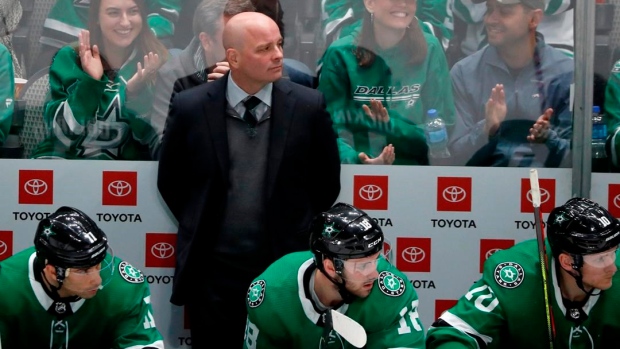 Former Dallas Stars head coach Jim Montgomery broke his silence for the first time since his firing last month, releasing a statement in which the Montreal native said he was seeking in-patient treatment for alcohol abuse.

Montgomery, 50, was fired on December 10 for what general manager Jim Nill called  "a material act of unprofessionalism," but did not offer specifics.

“Losing my job as head coach of the Dallas Stars last month was a wake-up call," Montgomery wrote. "It was also the appropriate call. I let the team’s front office, staff and players down. More importantly, I let my wife and my family down. The team’s decision to end my role forced me to look into the mirror and decide whether I wanted to continue living a damaging lifestyle or get help. I decided to get help. I turned to professionals in the field of alcohol abuse for their guidance and counseling. It has been an overwhelming and a very humbling experience knowing that I am not alone.

“Today, with the unconditional support of my wife and family, and many close friends, I took another step forward by admitting myself into an inpatient residential program, where I intend to take the steps to be a better husband, father, friend, coach and mentor – one day at a time. It’s a process I am committed to. As I do this, I ask that my family’s privacy be respected. Thanks, Monty.”

After Montgomery released his statement, Nill offered comment to the Dallas Morning News.

"We are supportive of this decision by Jim and we hope that by pursuing this help, he and his family will be stronger for it," Nill said. "Out of respect for him and his family, we will not be commenting on this situation further."

Over his year-plus behind the bench of the team, Montgomery posted a 60-43-10 record.

Prior to joining the Stars for his first NHL job, Montgomery spent six seasons as head coach of the NCAA's Denver Pioneers.