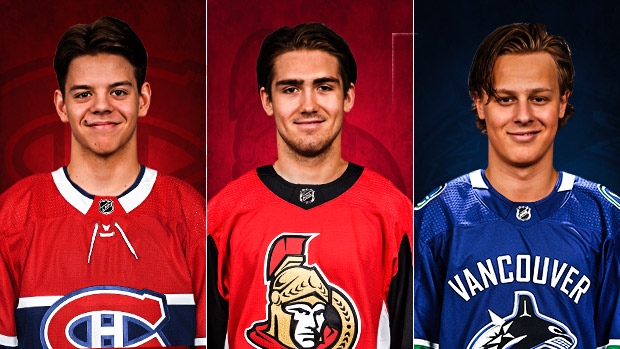 Trying to forecast the way the first round of an NHL Entry Draft will go is always a difficult task, but it’s made a little easier when you can start your mock with an absolute lock.

The Buffalo Sabres will get things started Friday night in Dallas by selecting Swedish defenceman Rasmus Dahlin first overall, adding an elite blueliner who has the ability to change the fortunes of the franchise.

It also seems certain that the Carolina Hurricanes have decided to take Barrie Colts winger Andrei Svechnikov with the second pick. The Canes currently lack difference makers, but they believe Svechnikov and last year’s first-round pick, Martin Necas, can bring a dynamic offensive element to the lineup for years to come.

The third pick, property of the Montreal Canadiens, is where things get interesting.

There’s little separating the next eight players in the draft in terms of potential. There’s everything from power forwards to two-way centres and offensive defenceman available.

It’s difficult to acquire top-line centres, so look for Canadiens GM Marc Bergevin to take Jesperi Kotkaniemi, the smart and talented Finn who has a game that is similar in style to Los Angeles Kings captain Anze Kopitar.

That leaves the Ottawa Senators with a lot of options in the fourth spot, but Halifax Mooseheads winger Filip Zadina makes the most sense. With Mike Hoffman’s 22 goals dealt to San Jose (and then Florida) on Tuesday, Pierre Dorion will be looking to add skill. Zadina is a huge offensive talent who could be ready to step into the lineup next season.

Brady Tkachuk heads to Arizona to round out our top five, edging his older brother, Matthew, for the distinction of being the highest drafted Tkachuk. Coyotes coach Rick Tocchet is going to like having the rugged and skilled Brady on his team. He becomes another St. Louis-area player drafted by Arizona after Clayton Keller, their first-round pick in 2016.

Elsewhere in the top 10, the Vancouver Canucks take a defenceman to complement their crop of good, young forwards. Adam Boqvist is a dynamic offensive blueliner with the potential to be an elite player.

Later in the first round, the Sens use their second first-round pick (No. 22) on Jared McIsaac, a solid two-way defenceman from the Halifax Mooseheads. The Toronto Maple Leafs use the No. 25 pick on Rasmus Sandin, a Swedish defenceman for the Sault Ste. Marie Greyhounds who adds the type of game that Josh Morrissey plays with the Winnipeg Jets.

Here’s a full look at our projected first round:

"He has a long, long way to go to earn favourable comparisons to arguably the greatest Swedish defenceman ever - Nicklas Lidstrom - but Dahlin already demonstrates much of the same ease and three-zone impact as the Hall of Famer." - Bob McKenzie MORE...

"Svechnikov has size, speed and skill. He can play a power game or a finesse game, make plays or score goals any way they can be scored - off the rush, one timers from far out, getting his nose dirty in front of the net or off the cycle." - Bob McKenzie MORE...

"His strong performance at the World Under-18 Championships in April has vaulted him into the top five and provided this draft with something that it seemed to be missing all season long - a potential No. 1 centre." - Bob McKenzie MORE...

"Zadina has quick hands and feet, he thrives in tight spaces and small spaces and is able to get off an incredible release on a shot that is arguably the best in the draft, as his 44 goals in 57 games would attest." - Bob McKenzie MORE...

"Tkachuk is a lot less refined and less polished than the other elite picks but the big raw-boned winger plays a hard driving, aggravating power and agitation game." - Bob McKenzie MORE...

"He plays a go-go-go offensive game, at times more like a rover than a defenceman. He’s fearless, not afraid to make high risk, high reward but also high danger plays." MORE...

"At a shade under six feet tall, the Swede is a dynamic offensive defenceman. He started and finished the season on extremely high notes - he was the best defenceman at the Ivan Hlinka U-18 tourney last August and again at the Under-18 World Championship in April."  - Bob McKenzie MORE...

"Dobson is a strong skater with a high degree of creativity, vision and offensive prowess. Scouts feel we’re only seeing the tip of the iceberg here." - Bob McKenzie MORE...

"He’s an elite shooter and goal scorer. Some say he’s somewhat one dimensional - “he needs a good centre to get him the puck because he’s not good at getting it himself,” one scout said - but what a dimension to have because scouts project him as a potential first-line scoring winger in the NHL." - Bob McKenzie MORE...

"The heady 6-foot-2 blueliner is arguably the best passer in the game. Long bombs, short outlets to get the attack started, he can do it all. " - Bob McKenzie MORE...

"Very smart two-way centre who contributes in all areas of the game and has potential to be a very key player." MORE...

"Smooth skating with intelligence and efficiency. Exudes a quiet, yet strong confidence on the ice. Looks like a 15-year NHLer." MORE...

"Plays all situations in the game with full understanding and has the skills to contribute offensively." MORE...

"Big, strong, smart, and can play the game with skill, smarts and power. Just keeps getting better." MORE...

"Very versatile and can adapt to different positions and play in different slots in the lineup. Very smart with good skill." MORE...

"Excellent skating playmaker. Drives play with his speed and creates opportunities for his team and headaches for opponents." MORE...

"All the elements to be a very good defenceman. Skates, handles puck, good shot and can be a physical force." MORE...

"A hungry scorer who likes to shoot the puck and gets himself into scoring spots and has a very good shot." MORE...

"All the skill to be a top six winger who is capable of scoring and being a playmaker." MORE...

"Very effective and efficient defenceman. Moves the puck, competes defensively and can add some offence." MORE...

"Can play centre or wing and plays with a balance of skill, will and a very strong sense of what needs to be done at any time." MORE...

"Not big in stature but he plays a strong game in all areas. Skates, thinks, makes plays with puck and competes." MORE...

"Smart with a quick mind and very good hands where he can make a play or finish a play. Improvement as good as any player." MORE...

"A classic Russian scoring winger with skating ability to break free and hands to finish." MORE...

"Foundation of his game is skating and he plays with a tenacity and intensity to find ways to contribute in all areas." MORE...

"Acquitted himself very well in the Swedish top league as a 17-year old. Smart and knows how to take advantage of his skills." MORE...