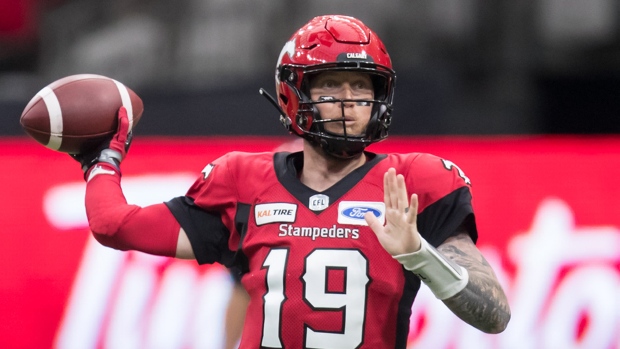 – The Hamilton Tiger-Cats host the Saskatchewan Roughriders in the regular season opener this Thursday, June 13 at 6:30 p.m. ET on TSN –
– The CFL ON TSN panel, hosted by Rod Smith alongside Matt Dunigan, Milt Stegall, and Henry Burris return this season and are on location in Hamilton for the opener –
– THURSDAY NIGHT FOOTBALL Presented by The Brick to be hosted by Kate Beirness and feature musical performances from exciting Universal Music Canada artists –
– TSN Radio stations across the country provide live CFL game coverage and comprehensive pre- and post-game analysis –

TORONTO (June 12, 2019) – Following a very busy offseason that saw several big-name players switch teams, the CFL ON TSN is set to kick off the 2019 season, with exclusive live coverage of all 81 regular season games. TSN’s coverage of the CFL also includes all four divisional playoff matchups, as well as the 107th GREY CUP presented by Shaw – one of 60+ iconic championship events, airing live from McMahon Stadium in Calgary, Alberta on Sunday, November 24. The complete CFL ON TSN broadcast schedule can be found here.

TSN and TSN Direct subscribers can stream TSN’s CFL coverage live, or view it on demand, via TSN.ca/Live and the TSN app. RDS delivers French-language coverage of 45 regular season CFL games, including all 18 Montreal Alouettes games, plus the complete CFL playoffs including the 107th GREY CUP presented by Shaw.

Highlights from TSN’s 2019 CFL ON TSN broadcast schedule include:

The popular CFL ON TSN panel is back for the 2018 season with the voice of the CFL, Rod Smith, and fan-favourites Matt Dunigan, Milt Stegall, Davis Sanchez and Henry Burris. Kate Beirness will join the panel to host THURSDAY NIGHT FOOTBALL Presented by The Brick.

The CFL ON TSN is anchored by the network’s decorated broadcast team of play-by-play announcers Chris Cuthbert and Rod Black, with Gord Miller and Smith calling select games. Game analysts Glen Suitor, Duane Forde, and Dunigan are set to appear throughout the season. TSN 1260’s Dustin Nielson joins the CFL ON TSN team and will provide play-by-play commentary for select games.

Matthew Scianitti will keep fans up-to-date on the latest news in the East Division, while Lalji and Sara Orlesky will cover the West. Additional team-by-team coverage will be provided by John Lu, Ryan Rishaug, Jermain Franklin, and Claire Hanna.

Following a successful season last year, TSN’s revamped THURSDAY NIGHT FOOTBALL presented by The Brick features host Kate Beirness, as well as a slate of halftime musical performances from notable Universal Music Canada artists. CFL ON TSN broadcasts will once again use The Reklaws’ CFL-inspired rendition of “Long Live The Night”, which has become the anthem of THURSDAY NIGHT FOOTBALL presented by The Brick. The complete list of musical artists can be found here.

Additionally, the CFL and Universal Music Canada expanded their partnership to include in-game broadcast music exclusivity and working with individual teams for music-related game day themes, raising the excitement level of the CFL game day experience.

TSN Radio’s family of stations across the country provide live CFL coverage, as well as comprehensive pre- and post-game analysis throughout the season, and are also the home of the 107th GREY CUP presented by Shaw. All TSN Radio content is also available via TSN.ca and the TSN and iHeartRadio apps.

TSN complements its CFL ON TSN broadcast campaign with a slate of digital content covering all angles of the league available on TSN.ca and the TSN app. Highlights include:

For viewers in the U.S., ESPN networks and ESPN+ will combine to present every Canadian Football League (CFL) game live in 2019 as part of a new, multi-year, exclusive U.S. rights agreement. Opening week kicks off with the Saskatchewan Roughriders vs. the Hamilton Tiger-Cats on ESPN+ and also features a trio of games on ESPN’s linear networks.

TSN is pleased to announce a roster of marquee sponsors for its CFL ON TSN broadcasts. The brands will be featured during pre-game coverage and incorporated throughout game broadcasts and include: