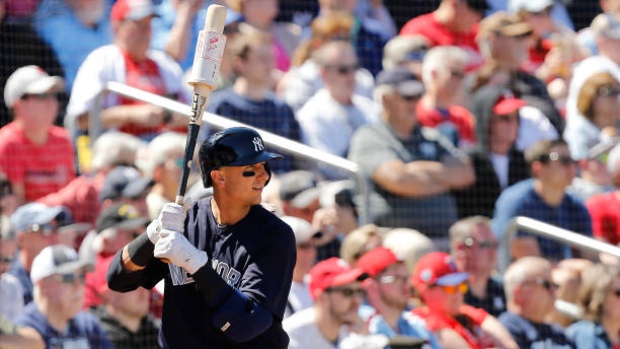 BALTIMORE — Yankees shortstop Troy Tulowitzki was placed on the 10-day injured list Thursday with a left calf strain, the 11th New York player sidelined just a week into the season.

A five-time All-Star, Tulowitzki left prior to the fourth inning of Wednesday's game against Detroit, two innings after hitting a popup in his only at-bat.

"I felt it on the swing coming out of the box," Tulowitzki said Thursday before the Yankees faced the Orioles. "I went out there tried to play defence. I knew I was in a little bit of trouble, so when I came in I thought it was best to get myself out of there."

"I know I'll be down for a couple of days to see if the soreness goes away," he said, hoping that his time on the IL would be "not too long."

Thairo Estrada was recalled from Triple-A Scranton/Wilkes-Barre to be a back-up infielder for a team already without starters Didi Gregorius and Miguel Andujar.

Signed as a free agent at the major league minimum of $555,000 to fill in for the injured Gregorius, the 34-year-old Tulowitzki returned after missing all of 2018 following surgery on both heels and is hitting .182 in five games.

"The good thing is it doesn't seem to be related to the injuries he's dealt with the last couple years," Yankees manager Aaron Boone said. "And it is a low-grade calf strain. But calf strains, hamstrings, those kind of things can be a little dicey. It's one of those that you've got to make sure it's 100 per cent, otherwise you start setting yourself back."

New York's 11 players on the IL are the most in the majors. Still, the Los Angeles Angels had 15 last Aug. 21.

"It's really been crazy," Tulowitzki said. "I've never seen anything like it. Sometimes it makes your team a little bit better. Test that depth. Some guys get some chances and maybe didn't think they were going to get chances. And they end up helping you a lot. It builds some character, too."

Estrada, 23, is on the brink of making his major league debut after being shot in his thigh early last year in his native Venezuela during a robbery attempt.

"When you think about everything, I got a gift. It's like a second opportunity," said Estrada, who was informed early Thursday he was headed to the Yankees after a five-hour bus ride to Buffalo for Scranton's season opener.

"As I was getting off the bus, the manager said, 'Welcome to the big leagues,'" Estrada said.